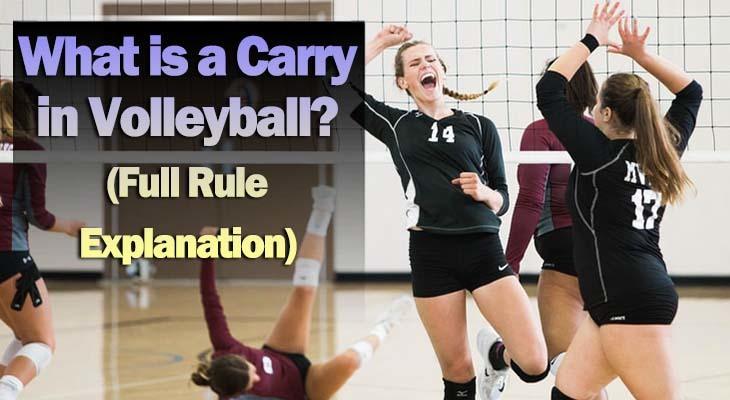 What is a Carry in Volleyball? (Full Rule Explanation)

Volleyball is a relatively simple sport to learn.

Essentially, each team gets three touches (contacts with the ball) to attack the other side.

Once you become familiar with the game, you will begin to notice some calls that seem a little more confusing.

Some of these more intricate calls include double hit, illegal back-row attack, and the one we will discuss today – the carry (also known as lift or, officially, as a catch).

According to the FIVB, a catch is when the ball is caught and/or thrown; it does not rebound from the hit.

The rule is built upon the more foundation of a more general rule that governs all ball contact, rule 9.2.2.

It states that the ball must not be caught and/or thrown. It can rebound in any direction.

It’s important to note that there are many instances where a carry can be called.

The rule is not only applicable to setters during their setting motion.

The Carry While Setting

The setter, or someone attempting to set in her stead, is often the victim of an official “catch” call by the referee.

This happens because the difference between a good set and a carry is paper-thin.

The referee will most often call a carry if the ball appears to stay in the setters’ hands too long (known as a catch and throw, per rule 9.2.2).

Any referee will tell you that the catch and throw call on a setter is quite challenging to get right.

As a setter, you should know this and allow the information to impact your preparation.

Beginners and weak setters will often allow the ball to come in close to their faces or even down towards their chests. This causes too much time with the ball in hand, leading to a catch call more often than not.

Coaches should encourage setters to strengthen their wrists and arms.

Most carries by setters are caused by a lack of strength and the player attempting to “throw” the ball to the outside hitting positions.

The Carry While Passing

It is possible to be called for a lift, or carry when passing from a platform.

This frequently occurs when beginners are determined to use their arm momentum to guide the ball to its intended target.

The ball can get caught in the crux of the elbows when a platform is imperfect, as well.

The key to avoiding a catch call while performing a pass is proper positioning.

The feet should be square to the target, the platform should be as even as possible, and a player should be confident using the ball’s force, leg strength, and sometimes a small shoulder shrug to provide the energy necessary to get the ball to the intended player. 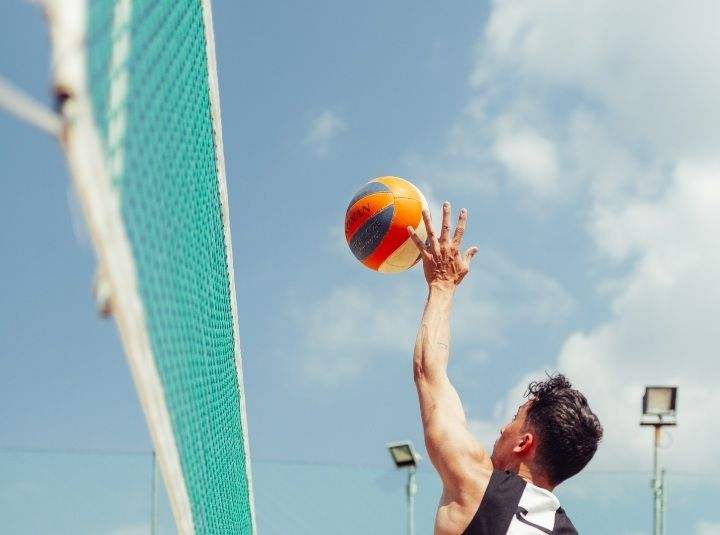 The Carry While Attacking

While rare, it is possible to be called for a carry while attacking the ball.

For clarification, an attack is any hit directing the ball toward the opponent.

Rule 13.1.2 in the FIVB rulebook states, during an attack hit, tipping is permitted only if the ball is cleanly hit, and not caught or thrown.

Players who are called for a carry during an attack are most often guiding or dragging the ball. This runs counter to the “cleanly hit” portion of the rule.

Coaches can keep players away from these violations by coaching athletes to always hit down on the ball. A hand under the ball or behind the ball is going to draw the referee to look closer at a potential carry.

If a player is determined to tip out of desperation or strategy, it is vital they use firm fingers or a two-knuckle contact. Any insinuation that the player is pushing the ball with a long contact period could indicate a carry.

We should spend a moment to address a common point of contention between players and referees:

The move is not addressed in the FIVB rulebook, as it is a mix of a hit and a tip. Referees will call it when it is obviously being used to guide the ball but usually let it go if it is not being overused.

The Carry While Desperate

The nature of volleyball lends itself to moments of pure chaos on the court.

While wildly running after a rogue pass or dug ball, it can become challenging to focus on clean contact.

The most important thing to remember while attempting to save a rally is that the ball should come off the hand, arm, foot, or whatever body part cleanly.

If it stays in your palm for even a split second too long, it will be called a carry.

Furthermore, a save play is usually keenly watched by the referee as it often takes time to develop.

Other Unusual Opportunities to Carry the Ball

The most unlikely call may be a carry on the serve.

If you coach or play on a lower level with servers who hit the ball underhand, there is an opportunity for a carry-like call.

The call would really be a call against not tossing or releasing the ball at the service. Some young or novice players will forget to toss the ball and hit it while their toss hand is moving up. This is a violation.

The call looks just like a carry with the referee moving her hand with palm up directly in front of her.

A carry call features the referee moving the open palm from waist height to chest height, while the not tossing the ball foul is simply an outstretched arm with the palm facing up.

Coaches with beginners on their team should focus on toss mechanics to avoid these types of penalties. As soon as a player is capable of an overhand serve, they should work hard on the skill.

The catch violation is sometimes unavoidable.

However, with appropriate instruction, practice, and focus, the violations can be limited to rare occurrences.