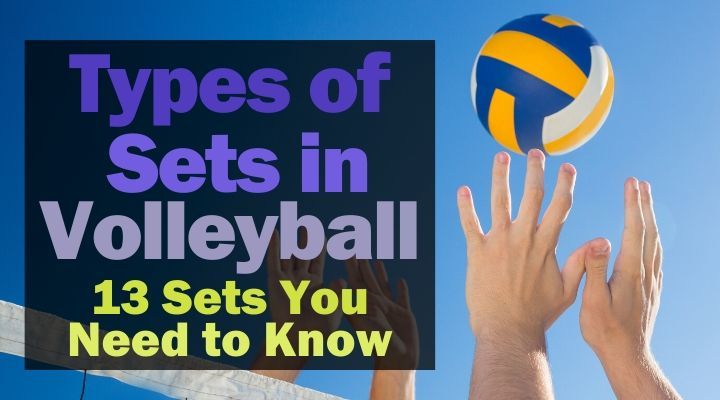 Types of Sets in Volleyball: 13 Sets You Need to Know

Once the basics of volleyball have been mastered (three hits to get it over, no catching/throwing, etc), it’s time to move on to the intricacies of the game.

Outside of the serve, the most important contact in the sport of volleyball is the set.

I can hear all the hitters getting upset but without the set, there’d be no quality hits!

The set is vital to any volleyball game plan.

Whether you want to set the same star hitter over and over or intend on using an array of attack points, getting quality sets is essential.

Keep reading to learn 13 types of sets in volleyball.

The set is defined as a contact (typically the second contact) that’s overhead to direct the ball to a hitter on the offensive side of the net.

Some consider second contact passes as sets (commonly called “bump setting”), but most of those contacts are made out of system and are not considered quality sets.

Bump setting would still follow the guidelines below regarding types of sets and their trajectories.

Your Guide to the Types of Sets in Volleyball

The diagram will be used for the three divisions of sets:

Each diagram will depict the trajectories and intended position of each set in the division.

All heights are height above the net, thus a set “one meter high” means one meter above the top of the net. 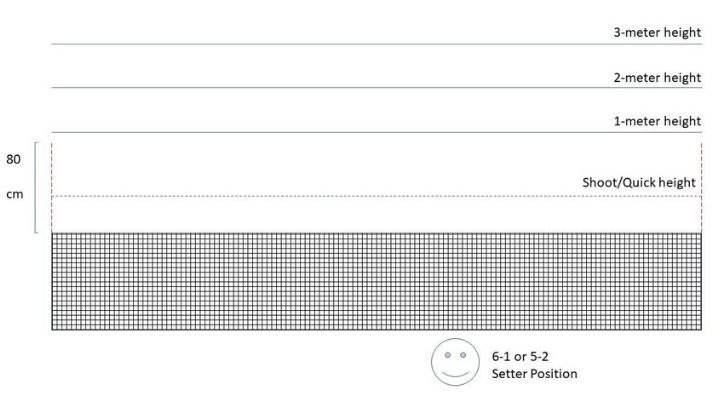 The slow (third) tempo is used to introduce new players to the sport.

Even an experienced setter playing with beginner hitters would benefit from starting with these.

The slow tempo set features high, slow trajectories that give hitters time to assess the ball flight and make a methodical approach.

The slow tempo allows new hitters to attack the ball at a fairly high point, making it easier to hit down and into the opposite court.

While blockers may find it easier to track and get in front of the ball, this level of player isn’t typically a polished blocker.

This division of sets includes one set to each outside position and one to the middle.

Hitters should start their approach just before the ball reaches the hands of the setter in third tempo.

A four is a high set with a trajectory that goes about three-meters high and comes down at the left front hitter just inside the antenna.

The ball should be about a meter off the net to allow plenty of room for the hitter to operate in.

A five is the opposite of a four.

The ball goes about three-meters high and comes down at the right front hitter just inside the antenna.

Once a rapport between setter and hitter is established, the set height can be reduced.

A two is set almost directly in front of the setter with the goal of the middle hitter attacking near the middle of the net.

The ball should only go about a meter high to allow for the middle to take their quicker approach. 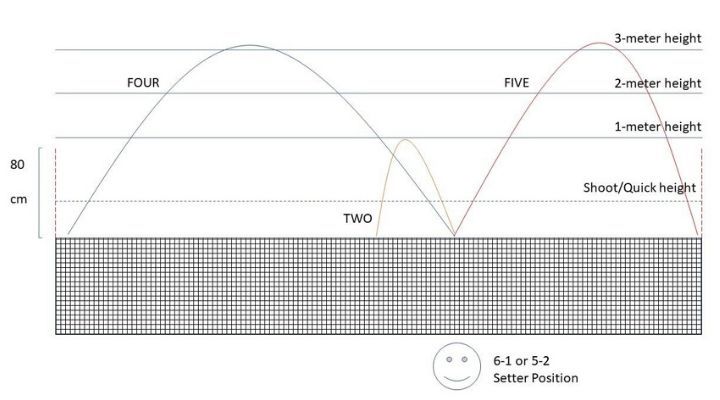 Second tempo is the natural step up from the slow tempo setting.

Players that have a year or so under their belts up to high-level high school players should be running second tempo sets at a minimum.

Most second tempo sets are closer to the net in both height and distance off the net.

The hitter must be proficient at approaching sets to attack, as the time from set to strike is less than a slow tempo set.

A second tempo offense is capable of beating blockers to the point of attack as the ball moves faster.

This division of sets has several to the outside hitters and a couple to the middle attacker.

Hitters should begin their approach as the pass or the first touch reaches its apex.

You’ll often hear hitters yell “hut” to call for a fast-paced outside attack.

The ball should be set at or near a meter high and land within a meter inside of the antenna.

The ball should be attacked by the left front hitter.

It’s used to confuse blockers about whether the ball is headed for the middle or left front attack.

The ball should be set at or near a meter high between the middle and outside hitter, to be attacked off the net.

The players running the 31 will often fake a swing at this set as the left front hitter attacks it.

This is the “hut” set reversed. It’s set to the opposite hitter for a right front attack.

The set height and landing point are identical – just moved to a back set for the right side.

Don’t forget to set the red to keep your opposite happy and the defense on its toes!

The two in second tempo is similar to the two in third tempo, just set a bit lower and closer to the setter.

This set allows a quick attack from the middle hitter while allowing the middle to run a normal approach.

There are some instances where the two is attacked by an outside hitter who has switched with the middle for rotational reasons or as part of a set play. 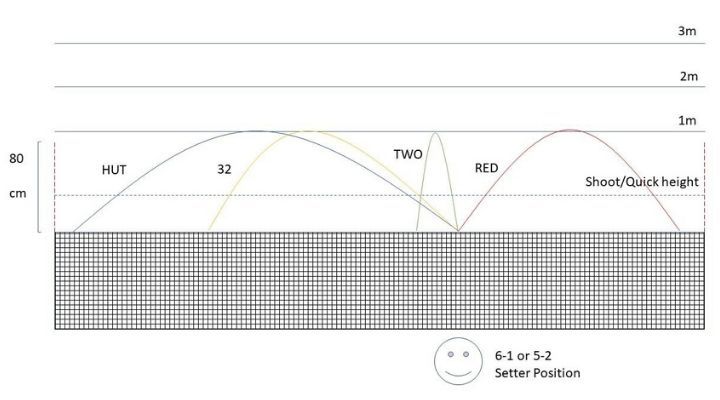 First tempo is designed for highly skilled hitters and setters.

As its name implies, offenses running first tempo sets are fast and proficient at most types of attack.

The pace of these offensive plays makes defending them more of a guessing game.

It keeps the blockers moving and players attempting to dig attacks have a hard time finding the right angles.

Hitters should begin their approach for a first tempo set as the ball leaves the passer.

This set is a quick one that gets to the left front hitter in a hurry.

The ball should travel almost parallel to the top of the net. Ideally, the attack would be made within a meter inside the antenna.

A shoot can be called a “go” as well.

It requires excellent timing between the setter and hitter.

It’s performed best when a setter knows exactly where the hitter likes the ball placed.

The half shoot goes about half as far as the standard shoot.

It can be hit by either the outside (left front) hitter or the middle attack.

A half shoot can be called a “three” as well.

Timing is everything with the half shoot and setters must remember where the hitter likes the ball set.

This set looks quite similar to the half shoot but does get up and down faster.

This set is exclusively for a middle attack, with the middle hitting the ball nearly as soon as it leaves the setter’s hands and clears the net.

If you thought the 31 was fast, check out a one set during a high-level volleyball match!

It’s set just above the net, high enough for the middle to swing down on it.

This is another obvious name as it’s the back-set version of a one set. Quick, low, and to the point – behind the setter.

Slide sets are fun because you get to see the middle blocker use some fancy footwork.

It follows the reverse trajectory of the half shoot.

The middle blocker will use a four-step approach to get to the ball that drifts toward the right-side antenna. The hitter will jump off one foot and slide toward the right, hitting the ball with a quick, sharp swing.

The slide can be altered to fall anywhere inside the antenna, depending on the rotation of hitters and the availability of an opposite hitter during the play. 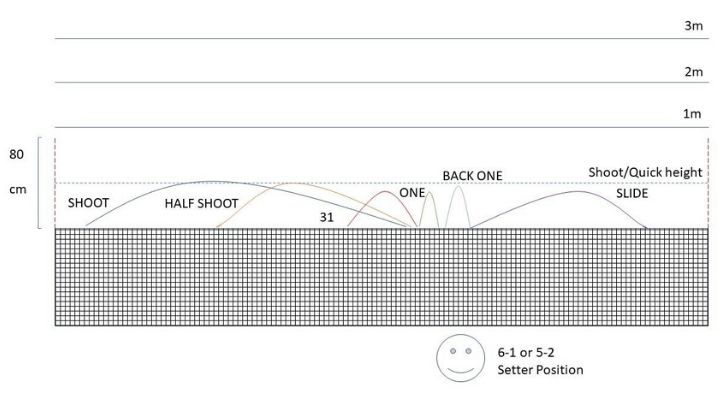 It’s important to note that most teams will create unique names for each of these sets.

When new players come together, whether for a camp or a new program, the standard names will likely be used.