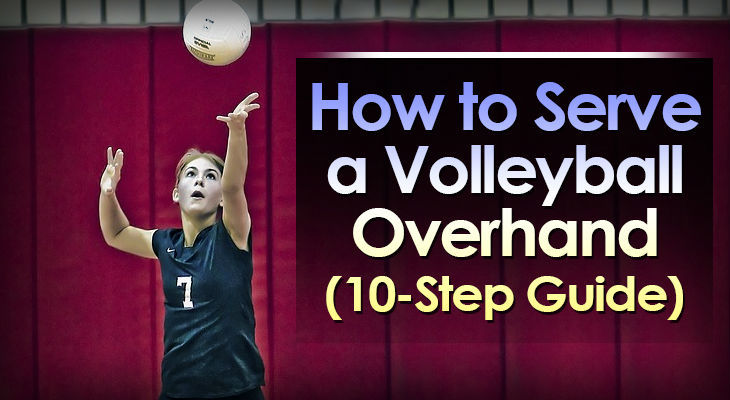 How to Serve a Volleyball Overhand (10-Step Guide)

An effective serve is one of the biggest weapons in volleyball.

Players who take the time to learn how to serve a volleyball overhand instantly give themselves a significant advantage over everyone else.

To be a great server, a player needs to be strong, consistent, and accurate.

When a player is able to reliably serve the ball to the opponent in a tough area to return from, it’s a huge advantage for a volleyball team.

Here are 10 steps to ensure a quality overhand serve each and every time. 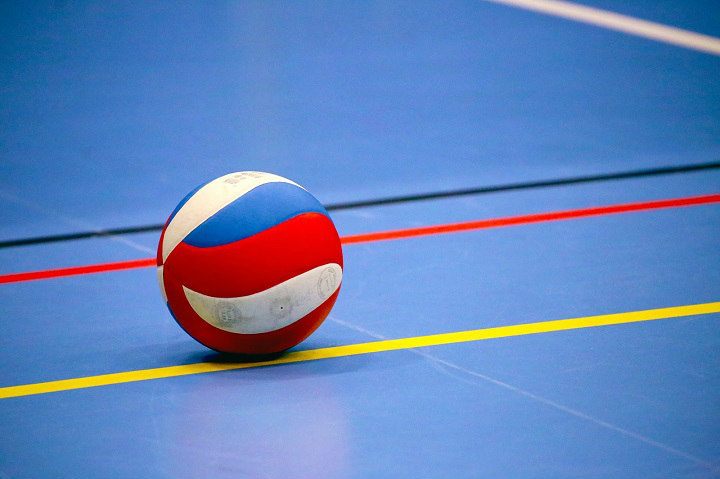 Step 1. Create a Strong Base

It’s impossible to serve consistently or with any pace when you’re off balance.

As a right-handed hitter, the left foot will be the guiding foot and the right foot will provide balance and strength by keeping the body supported from moving backwards.

An athletic, strong stance will allow the server to be balanced throughout the serve.

At this initial point, the server should have their weight slightly shifted to their back foot.

There are a lot of suggestions regarding where to place the feet and how far apart they should be, but it’s more important to “feel” stable and strong in a way that works for the server.

The weight will eventually be transferred forward slightly to generate power.

Step 2. Use Your Guide Foot

As mentioned earlier, the left foot is the guide foot for right-handed players.

(All technical suggestions can be reversed for left-handed players.)

The left foot should always be pointed in the direction of the serve.

This allows the hips, chest, and arms to complete the serve together as opposed to awkwardly twisting during the serve.

If you want to serve straight, point the left foot straight and align the hips and upper body with the left foot.

If you want to serve it across the court, point your left foot in that direction and align the body accordingly.

Once a target is established, immediately place the left foot positioned toward that target.

Step 3. Don’t Get Cute With the Serve

When your first learning, the odds of ‘tricking’ an opponent by facing one direction and serving another direction are quite slim.

In fact, the odds are far better that the serve will end up going straight out of play.

It can be tempting for many players to attempt to deceive the opponent about the direction of the serve, but it’s better to simply focus on aligning your body and serving towards the target.

This puts all the pressure on your opponent to return the serve.

It’s important to understand that there shouldn’t be too much movement of the lower body throughout the serving process.

Strength is generated by the upper body when the lower body remains a consistent, strong base to work from.

If a server begins shuffling their feet and eliminating the athletic stance established at the beginning of the process, then the serve will lose all its power.

An active lower body ends up leading to a player “chasing” the toss rather than simply completing the simple service process.

While there will eventually be a slight weight shift, shuffling of the feet should be left to the dance floor.

Holding the ball in the palm of your hand can be a nerve-wracking few seconds while waiting to make an important serve.

Which is why it’s important to develop the ability to hold the ball without it rolling off the palm or being gripped too tightly.

It’s vital that the server holds the ball comfortably but securely prior to the toss.

A confident ability to do so will allow the server to begin the toss with a high level of confidence. 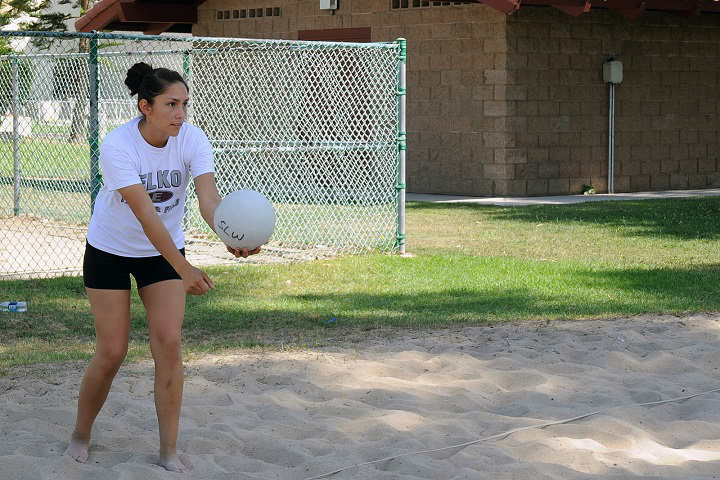 A player who understands how to serve a volleyball overhand knows that it’s important to minimise the number of variables.

One of the most important is to ensure the toss is the same every single time.

Regardless of the service direction, the toss should be consistently placed in front of the server in roughly the same spot.

This allows the server to develop a consistent striking motion.

The toss should be practiced to the point where a server can close their eyes and place their arm in the exact serving position where the ball would be.

If you’re looking for a general rule, the volleyball should be tossed two feet up in the air and one foot in front of the server.

This is the optimal place to hit the ball high and generate enough forward momentum for power.

While the lower body should be relatively quiet (for example, no shuffling of feet), there is movement required to generate some force.

Shifting the weight from the back foot to the forward guiding foot will give the server enough power to ensure a quality serve that lands on the opposite side of the net.

The player should not create a drastic weight shift as this could cause the ball to “hook” or move unexpectedly far left or right.

Ideally, the serve will be tossed to a spot where the player can hit the ball at the maximum height of their reach.

The higher the hand when it strikes the ball, the more likely the ball is to make it over the net consistently and with power.

When a ball is served into the net, often the server has tossed too low or waited until the ball was too low before striking it.

Focus on keeping hands high throughout the serve for a consistent ball that makes it into the opposite court.

Now that a strong base has been established, the guide foot has been pointed towards the target, the upper body is aligned, and the toss is consistent…

Remember: This is not the time to be hesitant with your arm swing.

Being hesitant usually means the player won’t follow through after striking the ball. And a serve without following through dies quickly and often ends up hitting the net.

If you’ve gone through your routine and know deep down that you’ve put in the hard work on your swing, then swing with confidence to show it.

The word ‘consistency’ has been used quite a bit throughout these 10 step, hasn’t it?

At no other time in volleyball is consistency more important than during the serve.

Players should be establishing a routine with with their mechanics and their thoughts.

For example, bouncing the ball the same amount of time before the toss and also mentally going through your serving checklist the same way every time.

Serving practice should walk the player through the exact routine they will use in the game. 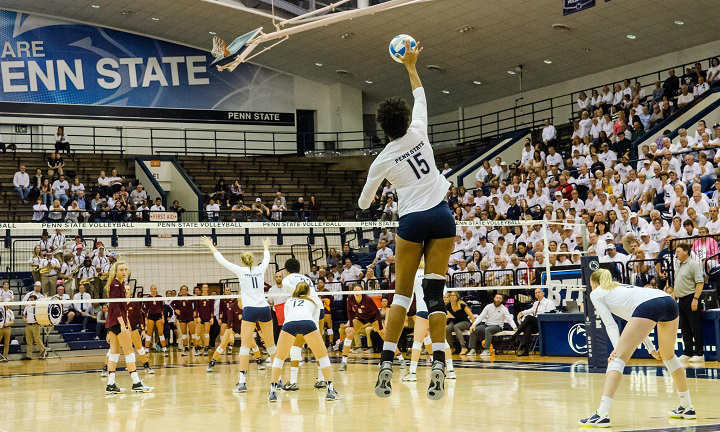 ​3 Other Ways to Serve a Volleyball

There are several other types of serves a player can use.

Let’s take a look at a few of them now…

A. The Jump Serve

The jump serve is challenging for even the best volleyball players.

The ball is tossed very high and in front of the server, who then walks forward and jumps to strike the ball at the highest point possible.

When done effectively, the jump serve creates significant power and a very difficult angle for the opposition team to return.

The ball tends to be very fast and drops quickly due to the amount of top spin created.

While it is possible to hit a jump serve that is flat, most players strike the jump serve in a way to create a massive downward trajectory.

B. The Floater Serve

A floating serve can be super challenging for the opponent as it comes across the net very slowly compared to other serves.

While this might sound like an advantage for a passer when you first think about it, it’s actually very difficult to predict where a slower serve will land.

It’s also hard to pass a ball that is very flat.

A floating serve is typically struck with a very open palm (with fingers spread) and has less follow through than a normal overhand serve.

Also known as the granny serve…

Learning how to serve a volleyball underhand first can provide consistency for the very beginner or amateur player.

The upward striking of the ball creates an extreme arc that typically allows the ball to make it over the net more consistently.

However, that same arc creates a very predictable serve that is quite easy to pass.

Regardless of serving style, consistency is key.

Developing a routine of how to serve a volleyball is vital to creating confidence for a player as they step up to the service line.

After a lot of practice, repeating the same process each time becomes second nature.

There’s no better feeling than feeling comfortable and prepared to deliver a serve that challenges the opponent.

Players of all levels can develop this skill over time and learn how to serve with confidence.