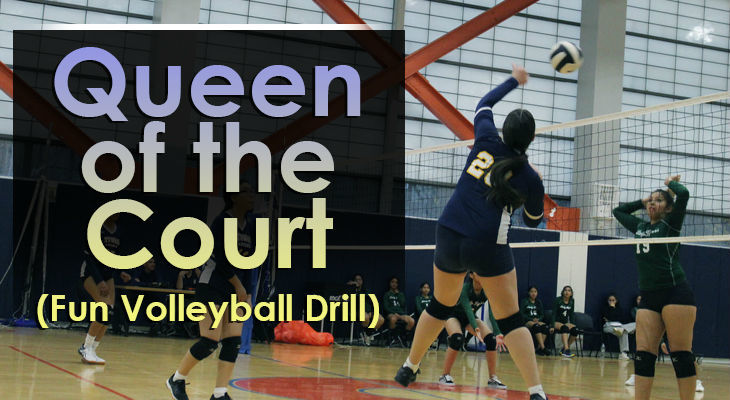 The best drills in volleyball keep players active and engaged without sacrificing form.

We often see players running mindless drills that cause them to disconnect with the moment and begin going “through the motions.”

Be assured – Queen of the Court (or Monarch or King or Ruler) is not one of these mind-numbing drills!

Queen of the Court is a fantastic volleyball drill for all skills levels because it can be run with any number of players and even beginners can keep the drill moving.

Here are the basic rules of the drill:

Now that we have the basic rules down, we can discuss the benefits.

Don’t worry, we will outline the drill in detail later and offer some alternatives to spice it up!

Benefits of Playing Queen of the Court

In our opinion, every drill should have a purpose.

As we mentioned earlier, running drills simply to fill time in practice or warmups can lead to complacency and a lack of engagement.

Here are ten reasons the Queen of the Court drill fulfils the goal of running a beneficial drill.

(1) Fast-Paced - The drill ensures players that are inactive will not be for long. This drill also requires some engagement from inactive players, as they must be ready to enter the court when their team is up to play.

(2) Instills Pride and Confidence - As their team stays on the court for multiple points, they feel the joy of success. Running this drill with two, three, or four players offers a moment to shine for players who might “disappear” in 6 vs 6 settings.

(3) Fun for All Levels - The pace of Queen of the Court allows players to really exert themselves and stay in the game. Even players who are not currently on the court know that the waiting time will not be too long. Knowing your chance will come soon to take the crown from an opponent is why we love to play the game!

(4) Competition - The reason we all play volleyball is to compete against the foes across the net. Queen of the Court gives players the opportunity to prove their worth against fierce competitors on the other side of the net.

(6) Builds Energy - Queen of the Court can be a good drill to start practice. It gets all the juices flowing and the energy up for the more specific parts of the remaining practice.

(7) Closing Drill - This drill is also great as a closing drill. It gives players something to look forward to at the end of a mentally challenging practice and is a great way to work on any mechanical issues you may have touched on during practice.

(8) Opportunity to Evaluate - Players can be easily evaluated during this drill. As with any fast-paced drill, it is tempting for players to break down form. Coaching opportunities abound throughout Queen of the Court.

(9) Adaptable - The rules of the game can be amended easily to allow for punitive additions like wind sprints for laziness or pushups for overpasses. You can also throw in rewards for excellent plays or extraordinary effort.

(10) Easy to Teach - Queen of the Court is very easy to teach. It can be implemented at practice, volleyball camps, or at open gyms with minimal time wasted explaining the rules. 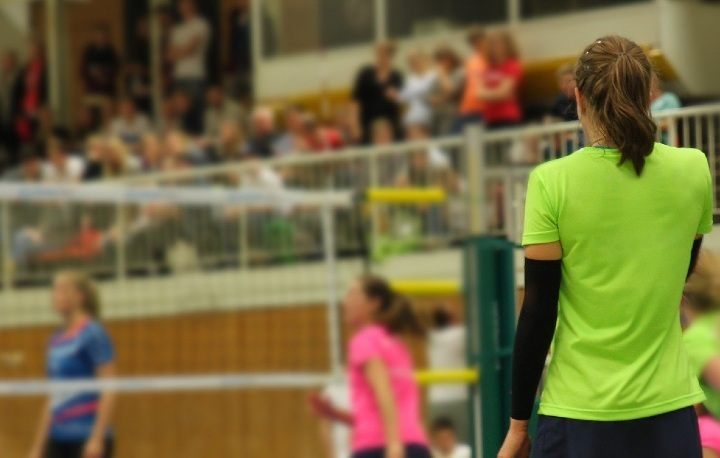 How Queen of the Court Works:

Now that we know how incredibly beneficial having the Queen of the Court drill in your repertoire is, we can take a look at exactly how to set up and run the drill.

First, let’s cover getting players in the right place.

We will assume two teams of three will be active at any given time. These numbers can be altered by simply adding or removing a player to each side.

Everyone should be in place now, so we can go ahead and break down a run-through of the standard drill.

1. A ball is tossed, served, or hit to the monarch side first.

2. The monarch side plays the point attempting to score against the challengers.

3. A score is considered any play that would result in a point or side out during a game.

4. IF the monarch side scores, they remain on the court to be challenged again.

5. IF the challenging side scores, they take their rightful place on the monarch side while the previous monarchs return to the line of players waiting to challenge again.

You might be asking yourself how to end this drill because it has a seemingly perpetual flow. This seems like a good time to talk about some variations you can throw in that will suit your needs.

While the rules of the game will always dictate who wins and loses a point, you can set up a scoring system to create a fixed goal.

For example, each time the monarch team holds court they get a crown. The first group to ten crowns wins. This could be challenging if you are working with an uneven number and rotating players in different teams.

You could mix this up and say crowns are only earned for consecutively held courts. If a team holds their court for nine points in a row but loses the tenth, they must move to the line and the new monarchs get to try holding for ten in a row.

It is important to make your scoring system suit your team or group.

If it is a group of young, beginning players, holding them to ten crowns in a row may take days.

The biggest variable in gameplay is certainly the number of players on each side and how you enter challenger teams onto the court.

We prefer to have challengers wait in lines of three behind the baseline on the challenger side (right-back, middle-back, and left-back). Players do not always have to return to the same line but must pick one of these positions to wait in.

Alternatively, players can wait in a single file line. This seems to slow down the drill as players decide where to go when it is time to enter the court.

Another big variable is how to start each point.

We recommend you decide based on the skill level of the players. Beginners might be best suited with a coach tossing the ball over the net while skilled players can be required to serve the ball from the challenger side.

If you elect to forego the scoring systems mentioned above, you can certainly set a time limit.

Start a countdown clock at 10 or 15 minutes prior to beginning the drill. Once the clock strikes zero, the monarch team standing wins. This will create a “hot potato” effect and keep teams eager to hustle through rather than walking to their positions.

Queen of the Court is one of my all-time favorite volleyball drills.

Any seasoned player has likely played some variation of this classic.

The combination of fun, competition, and skills enhancement cannot be beat.

Next practice, ask your squad, “Who is the Queen of this court?!”