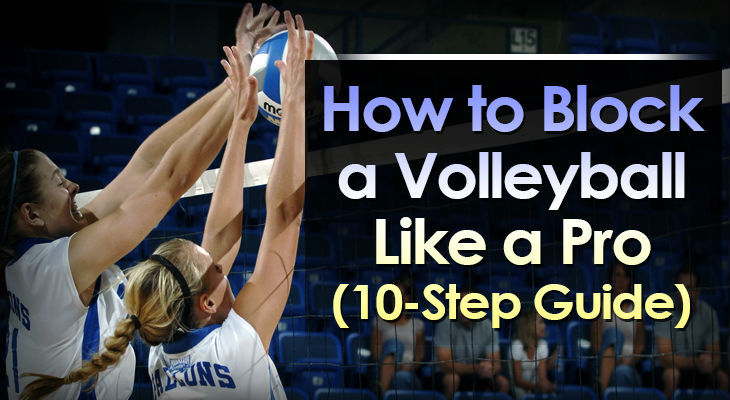 How to Block a Volleyball Like a Pro (10-Step Guide)

The art of blocking a volleyball against a hitter is more than simply throwing your hands up in the air and jumping as high as you can.

Becoming a good blocker requires both skill and technique.

Of course, being tall and athletic enough to jump very high will help…

But even if you don’t possess these gifts, you can still learn to be a good technical blocker.

The goal of a great blocker is not only to block the ball, but to do so in a way that puts the ball in a spot your opponent can’t get to.

By developing a technically sound block, you can ensure you’re blocking effectively.

Follow these 10 steps and you can enjoy the thrill of sending your opponent’s spike back to their side of the court more frequently than you ever have before. 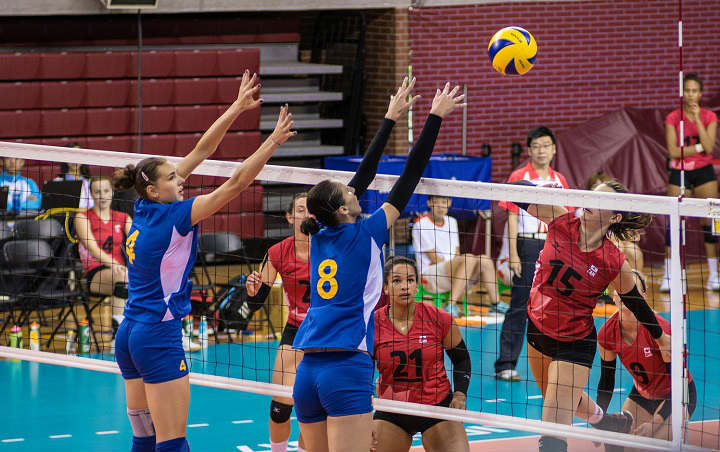 Mastering the Volleyball Block in 10 Steps

Step One - Find Your Square

The starting point of any good block is having your body square to the net.

Like any aspect of volleyball, it’s vital to remain as athletically postured as possible.

So developing a good “ready” stance is key.

Your body should be facing the net (chest and shoulders parallel) and feet should be just outside of shoulder width apart.

This should make ready to move laterally or vertically when needed.

It goes without saying that volleyball is an unpredictable game...

The ball could cross over the net at any time throughout a rally.

While most offenses attempt to utilize all three hits, the game doesn’t always work out that way.

Players at the net on defense must be ready to block at any time throughout the play.

Remaining in this position allows the player to be prepared throughout the rally for a blocking attempt at any time.

A major key to blocking success is being aware of what’s happening on the other side of the net.

There are several indicators that can give blockers a clue where the ball will be headed, providing an advantage when it comes time to set up the block.

The first thing to be aware of as a blocker is the opponent’s first pass.

If it’s well off the net and challenging the setter, blocking may be unnecessary as an overpass could be coming.

If it’s very tight to the net, you should be prepared for a setter dump or dink.

If the pass is too far outside, the setter will tend to go to an outlet play (usually a high outside set).

All these aspects of the pass can give incredible insight into what could happen with the rest of the play.

Being aware of where the setter is and where their body is facing will provide a decent clue regarding who is about to receive the set.

• If a setter is leaning slightly back while receiving the pass, then there is a strong likelihood they are setting behind themselves.

• If their body is upright or slightly forward, then the set is likely going outside.

• A vertical stance could indicate a set in the middle.

Having awareness of the setter and their position is imperative to good blocking.

It’s important for a blocker to understand where the hitter is always.

Of course, there are multiple hitters for the opponent, but each blocker has a hitter opposite them that they should keep track of.

Being aware of their location and footwork will lend clues to what is happening with the play.

• If the hitter is moving quickly to the net, then a lower, quick set may be coming.

• If they are taking a full, slower approach then a higher set can be anticipated.

• If they are idle, then the ball is likely not coming their way and your attention can be focused elsewhere.

The greatest blockers learn the tendencies of their opponent and can pick up on them throughout the play.

Being an active observer of your opponent throughout the match is vital to being able to predict what could happen and put yourself in a better position to block.

The art of blocking features a bit of a dance at times as you attempt to “shadow” your hitter and the ball.

There are two types of footwork that will allow you to get to the appropriate place on the court to set a quality block.

The side step will be the most frequently used footwork as it’s very efficient for moving from side to side in a short area.

The side step involves a shuffle right or left with your body still square to the net. This allows you to stay in your athletic, ready position, while commuting to the appropriate place to block.

The crossover step is useful when you have to travel a longer distance to get to your block.

Just as it sounds, the crossover involves stepping with the foot that is closest to your destination, then crossing the other foot in front.

This process is repeated until you are in proper position in front of your hitter.

While this step doesn’t keep you square the entire time, it does allow you to be facing the net and hitter while covering more ground than the side step.

Once you get to your spot, remember to be ready to go straight up.

In the final step of the “getting there” phase, it’s time to ensure you’re in proper position to have a successful block.

The ideal scenario has your body positioned with your belly button aligned with the opponent’s hitting shoulder. This ensures that your arms and hands are directly in front of the hitter’s hand as they strike the ball.

It’s vital that you adjust as the hitter goes through their approach. 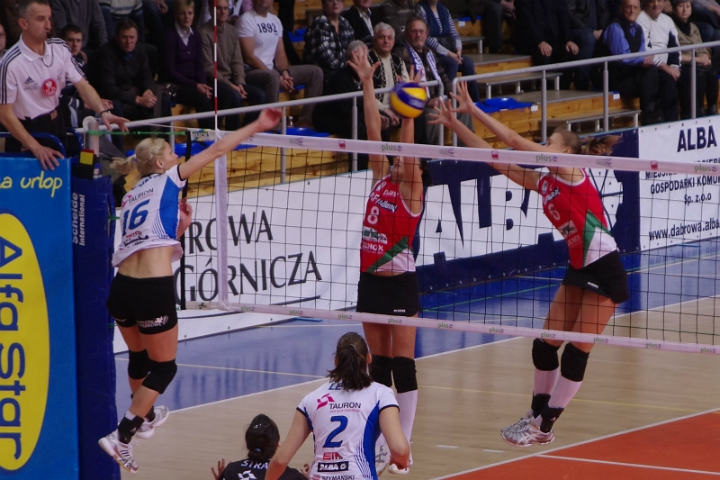 While there are steps to follow about body placement and footwork, the most important thing for a blocker to ingrain in their thought process is “be vertical”.

Often, a poor block is created by one of two things:

Regardless of how you get there, you should always jump straight up when attempting to block.

If you’re still moving sideways when you jump, your block will likely be ineffective.

Get to your spot, then go up.

Keep that in mind and your blocks will be more consistently solid.

When going up to block, it’s tempting to flex your fingers firmly and place them tightly together to form some sort of wall…

But you should be doing the opposite.

Your hands should feel “soft” with fingers outstretched as if you were preparing to catch the ball in mid-air.

Your wrists should be just the opposite of your hands.

They should feel flexed and strong, prepared to support your hands against the force of a spike.

There is a line in a song by Skee-Lo that goes, “I wish I was a little bit taller.”

In the world of blocking, everyone feels that way.

One way to make yourself slightly taller is to shrug your shoulders and tilt your head slightly down as you go up to block.

This extends your arms a little bit further and could make the difference between contacting the ball and it going over your hands.

Tilting your head down allows your shoulders and arms to fully extend.

However, you should still be able to keep your eyes on the hitter.

A bad blocker goes up and reaches for the ceiling, simply hoping to contact the ball.

Unfortunately, this leads to bad blocks or having the ball dribble down your chest.

It’s vital for a blocker to reach up and then over the net.

The goal is to invade as much into the opponent’s side of the net as possible without touching the net.

This angle puts the blocker closer to the ball and prevents the ball having room to come down in front of you.

A great blocker goes after the ball.

Blocking is defensive by definition, but the great blockers go on the offensive throughout a block.

They set their feet, find the hitting shoulder, go straight up, reach over the net, and try to take the ball away from the hitter.

Having this mentality encourages the blocker to be aggressive and penetrate above the net. A hesitant block is a bad block.

If you’ve followed the previous nine steps, then this last step brings it all together and creates the moment all blockers live for…