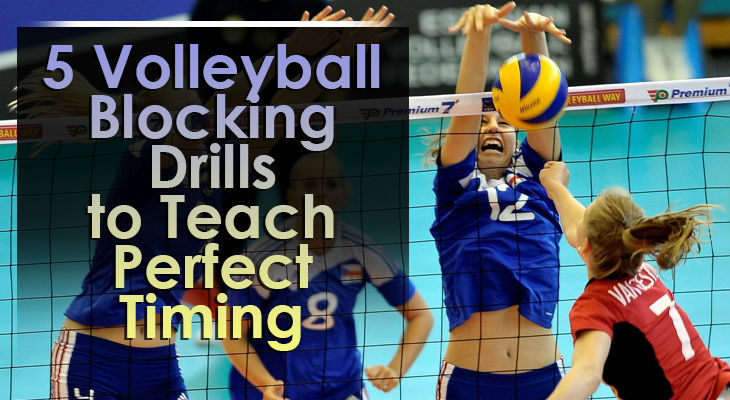 A good defense is predicated by a quality block.

While good passing and quality ball control are useful skills on defense, a successful block is the best way to stop or slow an attack.

Volleyball blocking drills should be utilised to hone blocking technique, reaction time, and the ability to read plays.

Blocking can be a challenging skill to practice, as many teams have just a few blocking players.

The following 5 volleyball blocking drills will incorporate blocking work along with work for other position players, ensuring team improvement with each drill.

This drill keeps blockers honest to be able to cover their area in the event a ball is popped up into the air. Many balls end up hitting the ground, as the player responsible for coverage is at the net unaware of the ball.

A ball is tossed from behind the blocker to a hitter on the opposite side of the court. The blocker tracks the hitter and times the block accordingly. The hitter attacks the ball as if it were a set.

Blockers react to a “free ball” tossed over the net at various depths with one of three options: kill it, block it, or set it.

The simple drill emphasises quick decision making by blockers when a free ball is just over the net and in the area a blocker is responsible for.

Teams play six on six volleyball with a free ball initiating play rather than a serve. The teams compete but the defensive side must execute a triple block on each attack. A point is awarded for a kill or a block. The first team to three points wins the drill.

This drill enables teams to work on setting a triple block and recovering to offensive positions quickly. The drill is exhausting for front row players, as the movement required for a triple block expends a lot of energy.

Teams run a typical offense with a quick outside set, encouraging the middle blocker to get outside quickly. The blockers will tandem block the outside, both going straight up with the hands. This will create a seam that must be covered by a defensive player.

This drill focuses on both correct blocking techniques and appropriate backcourt defense.

Competitive Play - Each dig is worth three points. Each time a blocker drops a hand into the seam costs the team two points. Each successful attack is worth one point. The first team to 12 points wins the drill.

A good block is the best way to impact the game plan of your opponent.

Blocking is a skill that requires frequent practice and many repetitions.

Use these 5 volleyball blocking drills to ensure your team is ready to set that big block when the game is on the line.