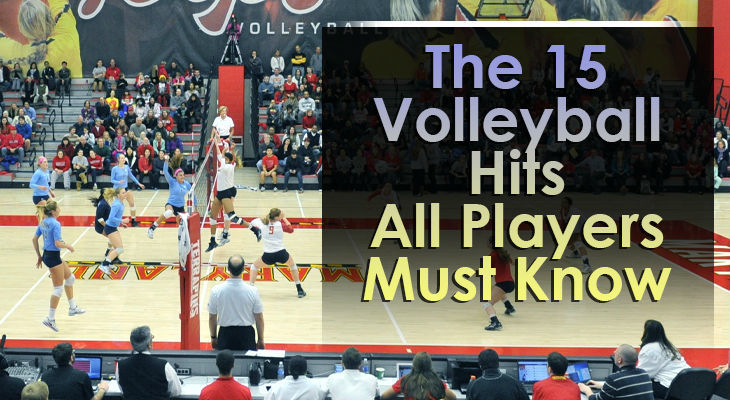 The 15 Volleyball Hits All Players Must Know

The basic goal of volleyball is to ensure the ball ends up on the opponent side of the net.

While unforced errors like hitting the ball out of bounds can result in a positive result, the only way to control a volleyball match is by getting the ball to the floor of the opponent.

Mastery a variety of volleyball hits is essential to success as a volleyball player and team.

There are 5 main categories of volleyball hits:

Each of these volleyball hits play a role throughout a rally.

Teams cannot function without the ability to perform each of these main types of hits.

The 15 volleyball hits below represent the skills that any good volleyball player must possess.

Teams with players who can successfully complete these will have a much better chance of winning a match. 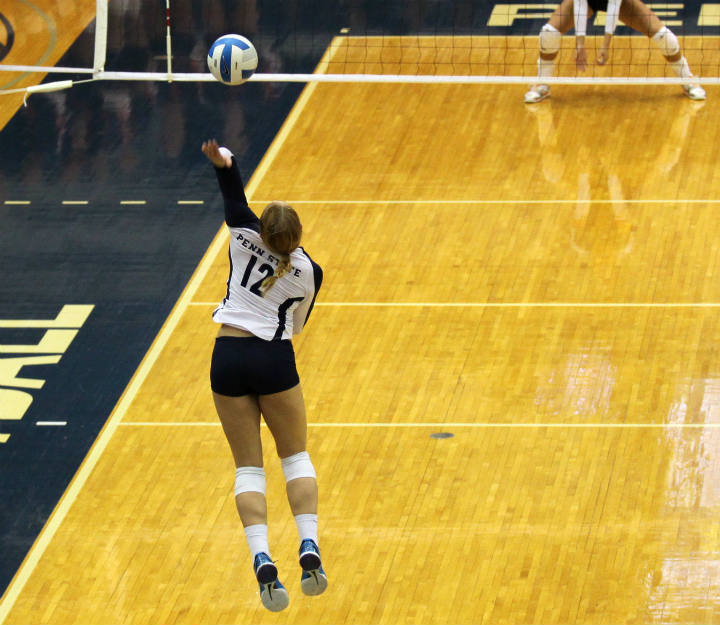 ​The serve initiates a rally and must be hit over the net on the first attempt.

The goal is to land the ball in bounds on the opposite side of the net.

A player stands behind the end line and completes one of the following hits:

​An overhand serve is the most popular way to serve the ball.

It can be efficient and powerful, leading to success.

The ball is tossed with the non-dominant hand above the head.

The dominant hand is then used to swing through the ball to direct it over the net.

Using a variety of swing strength and hand positions at contact can change the resulting trajectory.

​The underhand serve is used by beginners and those unable to swing at a ball above the head.

Rules state that the ball must be tossed or dropped by the holding hand prior to contact with the swinging hand.

​A jump serve presents a challenge for the opponent.

The ball is often hard hit and has a steep downward motion after passing over the net.

Players using a jump serve often start well behind the end line, toss the ball high in the air, and run to jump and swing at the ball.

Rules state that players must take off behind the end line but can land in the court after contacting the serve.

​A good pass is essential to a successful offensive attack.

Passes take place during serve receive or throughout a rally as a dig.

The ideal pass is one that goes to the setter at the optimal position to run whatever play has been called.

​Also known as the forearm pass, this pass is the easiest to control.

A bump pass is made from the forearms, or platform, of a volleyball player.

The bump allows players to absorb the energy of a spike or serve and move the ball to the setter with the appropriate height and spin.

​The overhead pass is used on serve receive or when a spike comes at a high angle.

The pass is completed over the head of a player with two hands.

It is similar to a set, but is a pass to the setter. 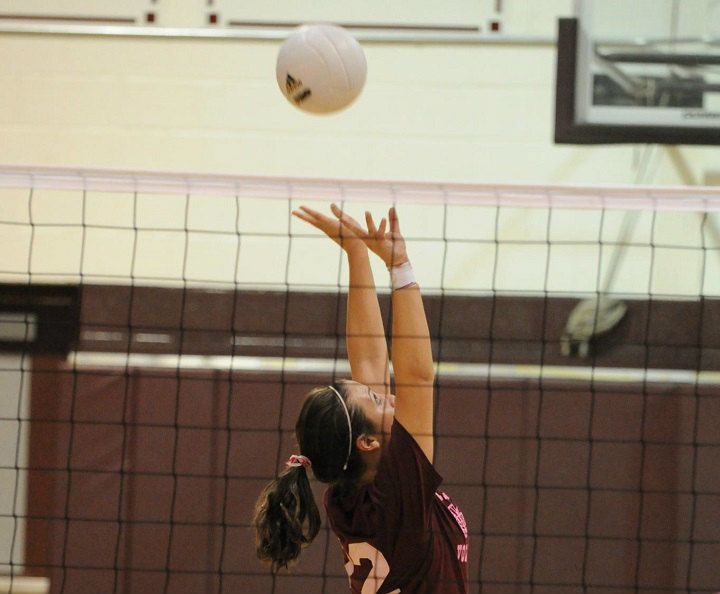 The set is one of the most complicated volleyball hits to learn in the sport of volleyball.

It’s an attempt to put the ball in a position to be hit over the net.

An ideal set is to a position that a hitter can impact the ball at the optimal angle to place it exactly where it needs to go.

​A quick set is run to catch the defense off-guard.

It’s typically a lower set, just above the net that is hit quickly before a block can be set up.

7. Sets by the Numbers

​Many teams use a universal number system to indicate where the set should go.

These numbers can be altered or included in a bigger offensive system, but newly formed teams or lower skill levels use this list for consistency.

1 = A quick set. Set directly above the setter for the middle hitter to attack quickly.

2 = Like the quick set of a 1 set but higher. Still directly above the setter for the middle hitter.

3 = A high set placed between the middle and outside hitter positions.

4 = A quick set. Set to the antenna on the outside for an outside hitter to attack quickly.

5 = This set is the most popular. A high set to the outside for the outside hitter to take a normal approach and attack.

7 = A high set. Like a 2 but directly behind the setter. Often for a moving middle attack or an inside, right-side attack.

9 = Like the 5 set but to the right-side hitter. A normal approach and attack are expected.

10 = A ball set for the back-row hitter. Typically, antenna height to allow for a good approach and swing.

​The bump set is often used when the setter is unavailable, and a less-skilled player is forced to set.

It utilizes the bump pass as the setting motion.

Most frequently a bump set goes to the outside hitter as a 5 set (see list above). 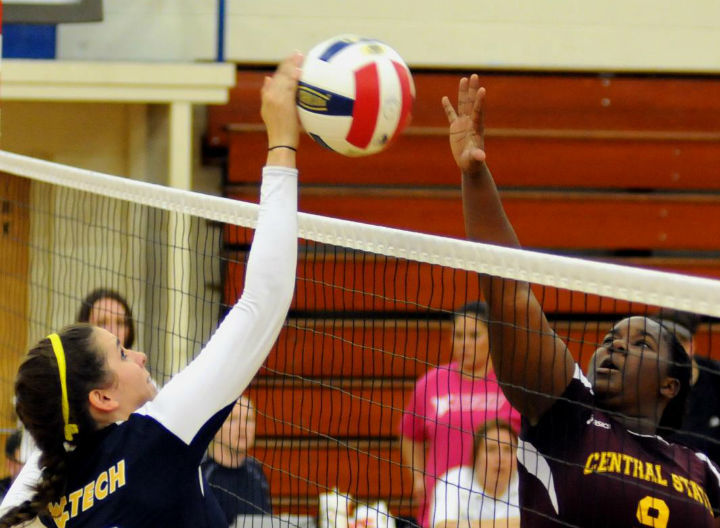 ​A solid attack puts the opponent in a position to have to scramble to keep the ball in play.

The attack is the attempt to get the ball over the net and down to the opponent’s court.

A good attack is predicated by a good pass and a great set.

Each of these attacks can be effective to score when used in the proper moment.

The spike is the most exciting hit in volleyball.

It involves the attacker jumping high into the air and swinging through or down at the ball.

The ideal result is a high-velocity hit with a downward trajectory.

​The roll shot often comes into play off a bad set.

It is a soft, overhead swing that relies on hand placement to create topspin.

The topspin allows the ball to travel over the net and then make a downward angle.

Some players perform a roll shot to catch the defense off-guard.

​A dink is a gentle touch by a hitter or front-row setter to push the ball over the reaching hands of blockers.

The ball falls behind the blocker into a (hopefully) uncovered area of the court.

Defenses must account for the dink when considering floor coverage patterns.

​A dump is frequently performed by a front-row setter.

The setter will pretend to go up for a set and quickly tap the ball over the net.

Great setters can perform this hit with the hand off the net – adding to the strategic masking of the play. 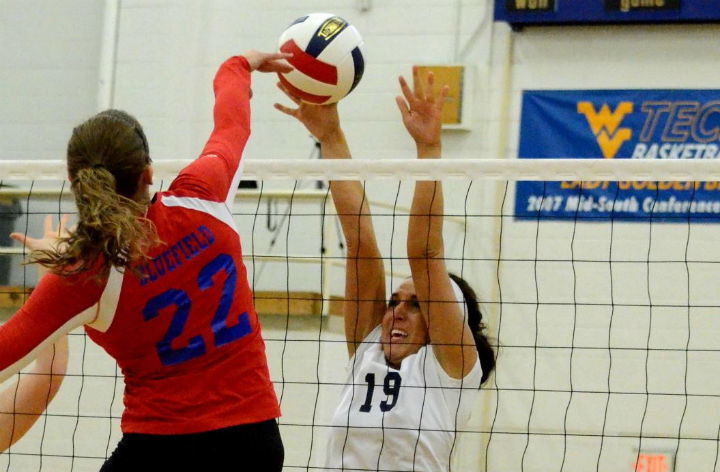 ​The block is the most effective defense against an attack.

A great block pushes the ball back to the attacking side of the net and down to the floor.

The goal for blockers is to get the ball back to the attacking side or slow the attack down by knocking the ball into the air for an easy pass.

​A block with one defender against the attacker is known as a single block.

This block can be effective with a good blocker against a less skilled hitter.

At the higher levels of competition, a single block is rendered useless by the proficiency of attackers.

​The double block involves the middle blocker and one of the two outside hitters.

These two players come together to create a block that is difficult to hit around.

Attackers are forced to hit through the block (a gap forms between blockers at times) or over it.

​The triple block is very difficult to execute.

It involves all three front-row players coming together as one unified block.

This is used rarely because of the challenge to get it together.

It can be used as a surprise tactic or against significantly inferior competition.

​There are other terms that further describe a hit.

These terms are often heard on courts at all levels and are popular variations of volleyball hits.

An attack aimed at the opposite angle of the hitter.

This shot is used by beginning attackers as it leaves most of the court available.

An attack aimed down the line from the attacking position.

This shot is effective if the blocker leans towards the court anticipating a cross-court shot.

A more extreme version of the cross-court shot.

The cut shot proceeds along a sharp angle from the attacking position.

A great cut shot lands inside or just past the three-meter line.

After an attempted block, players may hear a blocker yell out, “Touch!”

This indicates that the blocker felt the ball contact the fingers and proceed past.

Yelling “touch” allows the other defensive players to know to proceed with playing the ball, regardless of where it is headed.

The pancake is a dig attempt that requires the defender to slide head first with the hand outstretched palm down.

If successful, the ball will bounce off the back of the hand and into the air so a teammate can continue the play.

A pancake dig is a very exciting play!

Often used in outdoor volleyball, the deep dish is a type of dig used when a ball is hard hit at a defender.

It’s essentially a reactionary overhead pass with both hands.

​There are many ways to hit a volleyball and each of them has a role in a successful rally.

Mastering each of the many volleyball hits is vital for anyone hoping to be a great volleyball player one day.

Commit to learning all of them!