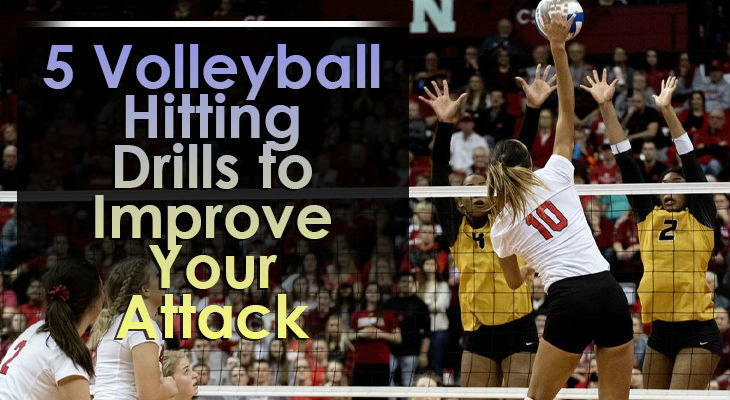 As one of the more exciting elements of the game, players love to hit the volleyball.

This love of hitting should be fostered, as it is the most likely way to score against an opponent.

As beginners, players are often excited to see any ball get over the net and down to the floor. However, as players progress, they begin to see the necessity for a variety of attack options.

The following volleyball hitting drills are designed to improve attack consistency, power, and diversity amongst all levels of volleyball players.

Lean on these 5 volleyball hitting drills to inspire your players to develop in these three areas.

Players rotate through a hitting line attacking tosses, or sets, to attempt to get the ball in bounds. Five successful attempts in a row equal one overall point. The goal is to reach five overall points to finish the drill.

This drill encourages consistency and provides rapid arm swing repetitions. Players rely on each other to be accurate in order to earn overall points and finish the drill.

Against a Block - For more game-like conditions, add a blocker or two across from the attack point. Only attacks that are in or tooled off the block count as successful attempts.

The drill mimics the importance of the first ball kill. Most balls are set to the left side hitter, so only allowing that side to score is realistic. Defense is key in order to earn the ability to score.

The first two steps of the standard approach are eliminated, and players are challenged to aggressively strike a tossed ball with just the last two approach steps.

This is one of the best volleyball hitting drills to encourage young players to make a quality play on a less than quality set.

Just Practice - This drill can be run without the team element. Simply have one attacker and two blockers on opposite sides of the net. A hitting and blocking line can be formed for the purpose of rotating players through the drill.

4. Hit the Square from the Back Row

Players will attack this drill in teams of four (including a setter). Only one team of four will be on the court at a time. The players will be served a ball from the opposite side of the net. Players must make a good pass, so setter can set behind the three-meter line. Attacking players will attempt to contact a target set up on the other side of the net. Once a predetermined number of attempts is completed, the next team up enters the court to perform the drill.

This drill encourages scrambling from the back row to attempt a targeted attack, rather than settling for free balls.

Players will attack a “block” formed by three foam pool noodles by aiming for specific pieces of the block. In order to be successful, the players must contact a specific noodle with the ball without contacting the other two.

This drill encourages hitting with purpose when attacking a strong block. Players develop hand control and the ability to craft shots rather than simply swinging.

Everyone loves to hit the ball in a volleyball game.

Unfortunately, many players find it difficult to hit with power, accuracy, or creativity.

These 5 volleyball hitting drills encourage players to combine skill sets while hitting to be a more complete attacker.