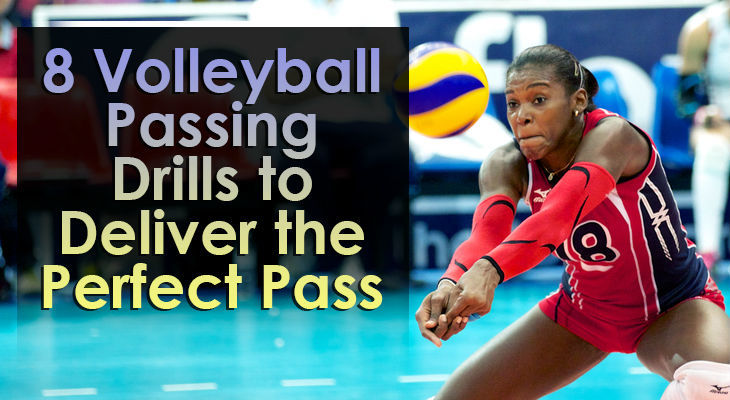 The pass is one of the most important skills in volleyball, as it will determine what the offense can do on any given rally.

Using different volleyball passing drills to practice the pass is vital because it requires a consistent base and arm platform, which can be ingrained into muscle memory.

The following drills will enhance the passing ability of your team.

From serve receive to digs, each drill will develop the skills necessary to ensure consistently good passes throughout a match.

One player is the passer while the other provides tosses to five spots. The passer will return each tossed ball to the player tossing via a good pass.

The X passing drill allows players to work on simple lower body movement and upper body positioning. It also encourages movement before the pass versus reaching for balls.

Players are challenged to complete a goal set of bumps into a square taped on the wall.

This drill develops consistency in the platform, from a variety of angles, to simulate in-game situations that require quick realignment and control of the passing platform.

Vary the Square Size / Height – This drill can work with a variety of square sizes and distances from the floor.

Standing Version – With a square about six feet from the floor, this drill can be done standing. The standing version requires the player to switch their forward foot between each bounce of the ball. This version includes a cardio benefit.

Players perform this drill individually and attempt to bump the ball into the air and catch it in the “sweet spot” of their platform.

This is one of the best volleyball passing drills to allow players to learn the location of their true platform sweet spot and track the ball into that spot consistently.

Each player should be standing with a ball with space to move.

Height – Once becoming adept at the skill, players can be encouraged to bump the ball higher into the air to make the drill more challenging.

One player will serve over the net on a line to a player awaiting to pass. The passer will give a good pass to the “setter” who will then catch the ball.

This drill provides passers the opportunity to pass a live ball and encourages proper serve tracking and body positioning. This drill is a great opportunity for players to get reps at both skills and does not require the presence of a full team.

Include a Setter – Including the setter adds a dimension of work for the setter, while providing a realistic target for the passer. However, this does limit the number of pairs that can participate.

This volleyball passing drill instills a habitually athletic approach to passing by demanding the passer to be in an athletic stance throughout the drill.

Players shuffle from side to side while maintaining a solid, athletic position to be prepared to pass.

This drill encourages the ability to create a good base and platform, even after fatigue has set in.

Increase the Heat – Players can attempt to “score” on each other by passing the ball low. Set parameters for how low a pass can be.

Work for Speed – The lines can be moved wider to increase the distance of the shuttle between passes.

Players will get up from a lying flat position and pass the ball to the middle front position.

This drill works on the skill to recover from a dive to make a good pass to the setter. It also teaches players to be comfortable with quickly getting up from the floor and back into the game.

Positional Variation – Players could also lay face down in their typical rotation and once the ball is smacked all players get up and a random player must pass.

One player is presented with balls to pass in rapid succession, requiring the passer to maintain an athletic stance and develop passing endurance.

Serve the Ball – Alternatively, if tosses are too simple, the player tossing could “serve” or hit the ball to provide some pace and difficulty.