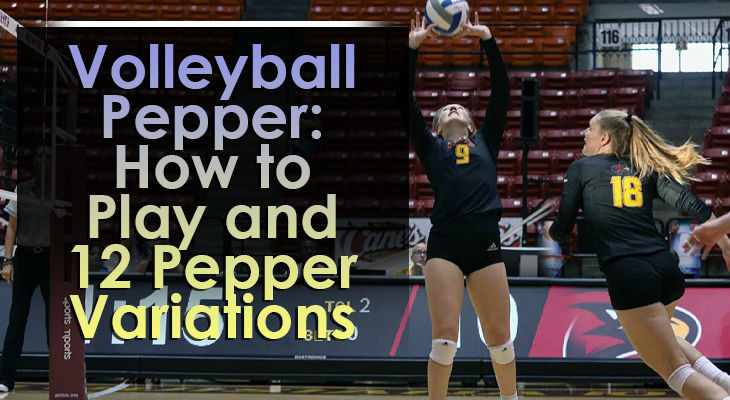 Volleyball Pepper: How to Play and 12 Pepper Variations

If there is a volleyball around, it is likely to be picked up for a game of “pepper”.

Typically used as a warmup drill, pepper is an easy way to mimic the three main skills used throughout a match:

In the standard round of pepper, players face each other about eight feet apart.

The first player tosses a ball up to themselves and softly “hits” it to the opposite player.

The process continues if players can continue digging, setting, and spiking to each other.

While pepper is a classic warmup drill or just a fun way to enjoy two people and a volleyball, many variations have emanated from the original.

This variation changes one simple aspect of the original game of volleyball pepper. Rather than digging a ball driven down, the ball must be passed overhand. In order for this variation to be successful, the player hitting must hit a higher ball at the player opposite them.

Rotating pepper encourages players to switch partners at certain intervals. The remainder of the drill is the same as the original. This variation can be great for newly formed teams, as it is a bit of a social introduction to each other.

This format requires players to get close to each other and perform the original drill of volleyball pepper. Quick Pepper ensures players can manipulate their “touch” to keep the ball alive. As the two players are in close proximity to each other, the strength of the hit should be reduced for player safety.

The Keep it Moving variety of pepper demands players maintain a consistent tempo throughout the drill. The wrinkle is that the player digging has the option to dig the ball high or low, requiring the setting player to adjust the speed and angle of their set.

5. Me Twice then You

This variation requires the digging player to set as well. Thus, one player will dig the ball up to themselves and set the hitter repeatedly. This allows the hitter to continue the same movement, potentially providing a better warm up. Players switch after a predetermined number of successful rounds.

One player (A) holds two balls to start the drill. One ball is tossed high in the air toward the opposite player (B) while player A continues to hold the second ball. This begins the cycle.

This cycle repeats until the drill is complete. 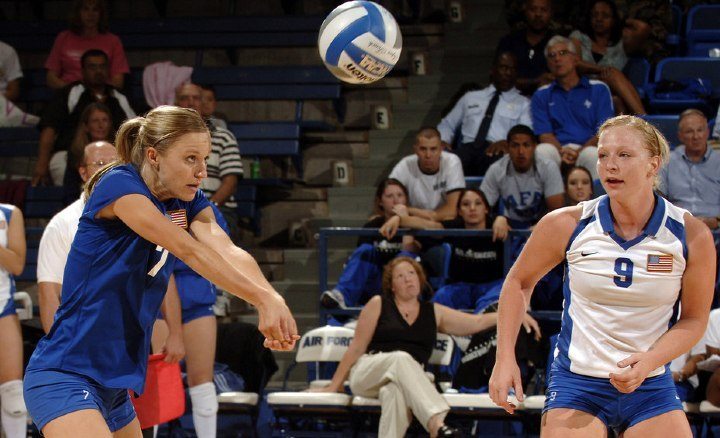 Advanced Drills Based on Volleyball Pepper:

This drill expands on the basic volleyball pepper by introducing movement and communication requirements.

​This drill requires four players and one ball.

The player alone is the “hitter”. This player hits the ball at the other three players. Depending on the hit location, a player will call the ball and dig it up into the air. After digging the ball, this player immediately runs to the opposite court.

There are now two players in each corner. One of the two remaining from the original three will call the ball and set it into the air. This player will immediately run to the opposite corner.

There are now three players opposite one player again. The final player from the original three will hit the set ball to the three now opposite and will start the process over.

Communication is vital as there are three players in one area preparing to dig a ball. It continues to hold importance as a player will have to identify themselves as being the one to set.

This drill is perfect to develop active communication and provides conditioning.

8. Over the Net Pepper

Like the original volleyball pepper, this drill promotes good ball handling and is a great option for warmups.

​This drill requires three players, a ball, and the net is set up.

The setter then moves to the passer position. The hitter goes under the net to set. The original tossing player now serves as the hitter. This cycle repeats.

A fourth player can be added to the drill. In this case, the hitter and setter switch positions on the same side of the net and no one goes under the net.

The introduction of the net to the game of pepper increases the game-like environment and encourages net awareness.

9. Six and a Diagonal

​This drill requires six players, a ball, and the net is set up.

This drill encourages control by requiring the player to hit to a specific player on the other side. It also works on the skills required for back-row attacks and scramble plays.

It’s a good idea to have balls on hand to quickly put in play after an error.

This challenging variation of volleyball pepper can test even highly-skilled players.

​This drill requires six players, a ball, and the net is set up.

A ball is tossed to one group of three on either side of the net. Volleyball pepper rules are followed with each player required to perform one of the techniques: a dig, set and hit.

The hit goes over the net and the process starts again. All players must stay in the back row throughout the drill.

As this is more of a practice drill, set a goal for successful attempts or a time limit ahead of time.

This drill is meant to be cooperative and players would be wise to hit toward good passers and set to good hitters.

This doubles version of volleyball pepper allows players to work cooperatively in pairs.

​This drill requires four players and a ball.

The drill is initiated with one pair receiving a tossed ball. They alternately perform the dig, set, hit techniques of normal volleyball pepper. The hit is directed to the other pair who performs the three techniques and hits the ball back.

Players will need to communicate as the ball is hit to determine who will be the passer. This is a great drill to encourage cooperation and practice controlling the ball over distance.

This drill emphasizes good sets and a proper hitting approach in transition. It provides a conditioning component for the active players.

​This drill requires nine players and a ball.

A ball is tossed to the back row on the side the “active” group is starting on. A back-row player passes to the setter who sets to a hitter. The hitter attacks the ball to the opposite back row.

The active group moves under the net to repeat the process the other direction. This continues until seven successful attack, dig, set, attack sequences are accomplished.

It may be too challenging for some groups to accomplish seven in a row, so requiring seven total successful attacks and digs may be more reasonable.

Pepper is a simple drill yet has provided an excellent opportunity to warm up and work on ball control for a long time.

Variations like these improve upon those traits and can encourage development in other areas like conditioning, mental toughness, and communication.