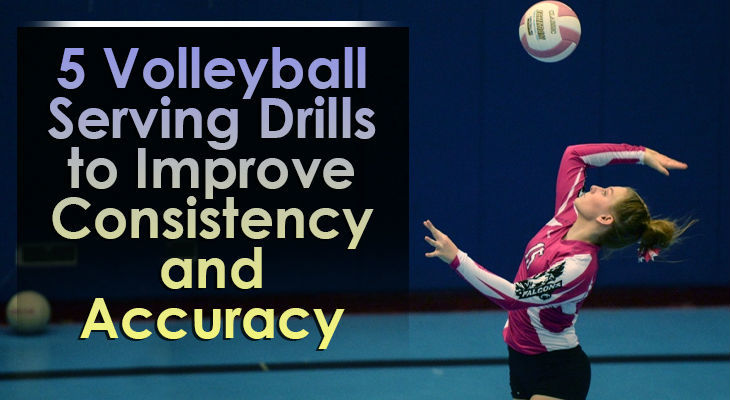 Serving may seem like a static task – just stand there and get it over the net – but the serve can be one of the more pivotal moments of a match.

It’s important to not only practice serving the volleyball, but to try and simulate a game-like environment as much as possible.

In this post, I’ll show you 5 volleyball serving drills that will develop consistency and accuracy.

Many of these drills will also create scenarios of serving under duress, featuring running to simulate serving while tired, or adding pressure to mimic an important serve.

Players compete against each other to be the first to hit the target enough times to score a predetermined point score.

This drill encourages accuracy under pressure versus simply “getting the ball in”. It creates an element of competition to mimic game-like pressure.

Round Robin – You can create a tournament format that allows for an overall winner. This will add to the competitive and pressure scenarios.

Players attempt to serve to a precise spot on the court to a teammate that is seated on the floor. If the ball is caught, the server joins the seated player while the rest attempt to join them as well. All players must be seated within the time limit to “win” the drill.

This volleyball serving drill adds an element of fun, while tasking players to display pin point accuracy. A time limit for success creates a pressurized environment.

Time Crunch – As the drill gets easier with more players seated, remove time in increments off the clock for each seated player. This adds even more pressure to the remaining players to complete an accurate serve.

Players will all serve at once, attempting to hit a ball basket in each zone sequentially. Once the basket has made it around all six zones twice in a predetermined amount of time, the team “wins” the drill.

Being able to serve to every zone on the court is vital to taking advantage of an opponent’s poor serve receive. This drill practices the ability to serve to each zone, while adding pressure of a time limit.

Power Up Around the World – For each serve that does not hit the basket, the player must do five pushups and three jump squats before attempting again. This variation adds an element of conditioning that is valuable to serving when fatigued.

Players are tasked with hitting a target called out immediately before serving. For a player to “win” he or she must hit the called target on the first try.

This drill helps players with the challenge of serving to different targets throughout a set or match. The lack of preparation simulates the in-game scenario of signaling zones during a match.

Team Play – This can be done as team versus team, allowing for a more competitive natured drill with higher pressure.

This is one of the best volleyball serving drills for developing pinpoint accuracy inside of a zone and learning how to serve consistently under pressure.

One Cone Corners - Place one cone in each back corner. Teams alternate serves attempting to knock the cone. Each cone hit is a point. Set a goal score to determine a winner.

All for One – Each side will serve at will, attempting to knock the cones down. The first team to knock them all down wins.

​Serving is one of the main volleyball skills that requires a high level of focus.

These volleyball serving drills combine the development of required muscle memory with stressors like noise, pressure, and fatigue.

Finding ways to create pressurized situations that mimic the intensity of a big game moment is essential to preparing players to perform during a match.

Use the drills to have your team serving with pinpoint accuracy on a consistent basis.