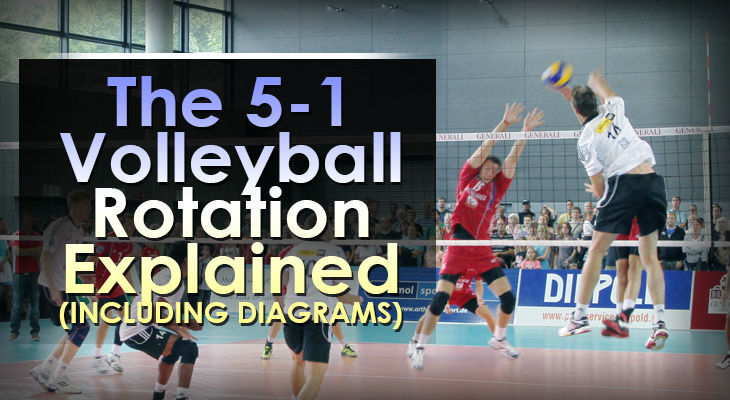 The 5-1 Volleyball Rotation Explained (Including Diagrams)

As a volleyball coach overlooking prep for the new season, you’re likely confronted by a key decision for your new team...

And that is a choice between the 6-2 and the 5-1 volleyball rotation.

Of course, there are multiple rotations you can choose from depending on the strengths and weaknesses of your players, but the 6-2 and 5-1 volleyball rotations are far and above the most popular.

And in this post we’ll be focusing on the latter.

The 5-1 rotation, as you may well know, is an offensive set-up of 5 hitters (non-setters) and a setter.

The introduction of the libero and defensive specialist will, of course, change the equation. But the principle remains the same...

​There will be only one designated setter on the floor.

Now, before we dive in, you should keep in mind that while we’re primarily talking about the 5-1 volleyball rotation as an offensive set-up, your choice of rotation affects both the offensive and receiving game of your team. 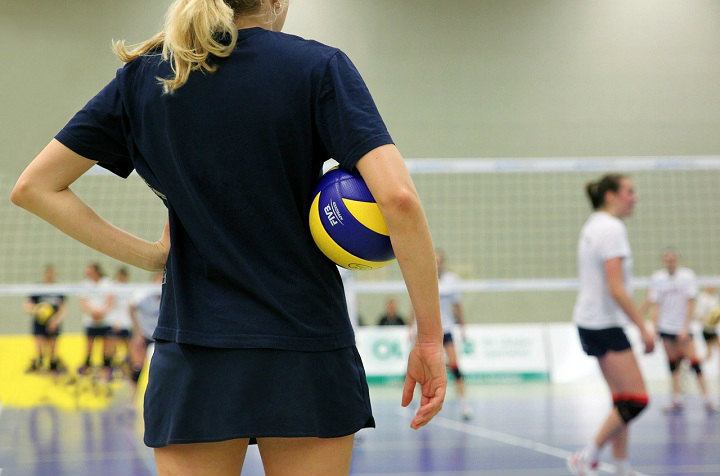 Your team must realise that serve-receive plays a vital role in organizing the players to ensure there is no overlap.

Having these drills well-rehearsed sees to it that the players stay in legal rotation and it will also guarantee that players with good passing skills are in appropriate positions to make the first pass.

​So, Why the 5-1 Volleyball Rotation?

When selecting your team's rotation, it's important that you consider the abilities of the players on your team.

Each formation is made to suit a team with a particular style or combination of strengths. So making the right choice of rotation means first understanding the strenghts and weaknesses of your players.

The 5-1 rotation is a popular choice among teams who have a dominant setter. But that doesn't necessarily mean it's only a good choice for such a team.

There are definitive advantages to a system that utilizes only one setter:

A one setter rotation provides consistency for an offense. Each of your hitters will become accustomed to the setter and their tendencies.

Similarly, a setter who sets the entire game or match can gain a better feel for the strengths of each hitter. Eventually achieving an instinctual understanding and rhythm with each hitter.

And as you can imagine, this would be harder to achieve with two different setters who possess different strengths.

Another advantage is that a setter in the 5-1 rotation does not substitute.

This virtually takes the substitution rule out of play, allowing for more flexibility in the back row.  So now, you can sub-in a defensive specialist when an opposite hitter enters the back row.

There are benefits when the setter enters the front row as well in case of the 5-1 volleyball rotation.

A 5-1 setter in the front row can attack, allowing for a tap over or “dink” when the ball is too tight to the net.

Also, when a 5-1 setter is in the front row, it allows space for the middle blocker to run plays behind the setter.

These attacks can be difficult to defend and they’re very effective as they are an abnormal approach for the middle to hit from.

​But Wait! There Are a Few Negatives...

There are always some drawbacks to be considered when making a decision on a system...

And the 5-1 volleyball rotation is no exception.

Yep, the problem is that you have just the one setter in the 5-1 formation.

Having one setter on the floor means that if the setter happens to make the first pass, someone else must be responsible for the setting duties.

Typically, a libero or defensive specialist will take on the setter’s role if a setter is “out” due to receiving serve or is the first pass.

It can be challenging for an offense to run efficiently with the libero filling in to set. The libero cannot effectively set the middle in this scenario and therefore, offensive options become quite limited.

​Basics of the 5-1 Volleyball Rotation

Now that you’re generally aware of what the 5-1 brings to your team, it’s time to understand how it all works in this system.

Before getting into the finer details, here are a few fundamentals to be mindful of to make the most of this rotation:

​1. The standard location for the setter after the first pass is right of the middle, around two feet off the net.

Regardless of where the setter begins the play, the pass should always be intended for the same location.

While the setter may not be able to make perfect position each play, whether due to a bad pass or some other variable, having a standard starting point allows for consistency and predictably.

​2. As soon as the opponent service has been served, players should head straight for their assigned positions.

Ideally, players will be in position before, or as, the ball is crossing the net.

Setters should be heading to their right of center location, while hitters are preparing for hitting approach.

This allows for a seamless transition into the offensive play.

​3. It’s crucial that all players follow the setter’s lead.

The setter dictates offense, hitting strategy, and all variables in the game plan.

They are the primary source of information for the team and attention must be paid to their instruction during and between plays.

​4. When in serve-receive, your players must position themselves for optimal playmaking ability

The goal in a 5-1 serve receive is always to “protect the setter” from being the first passer.

This allows the setter to remain in the play and set, versus being “out” and needing another player on the court to serve the role of setter.

Each rotation puts the setter in a protected position and moves others to provide sufficient coverage to receive serve.

​How the Rotations Work

Now we will get into the mechanics of the 5-1 volleyball rotation system.

Keep in mind that when discussing rotation, a standard numerical indicator system is used to indicate players.

Base rotation consists of numbers one through three in the front row with one being on the right when facing the net, two in the middle, and three being on the left.

As each rotation progresses, the numerical positions rotate clockwise. The final rotation has the setter at right-front and the number one position in the middle-front.

The rotation must be kept in its sequential order with each position being in their appropriate rotational spot. However, players can manipulate the space as long as they do not overlap into another rotational spot.

Overlapping the player in front of or beside creates an out of rotation situation, which results in penalty.

And trust me, you don’t want to accumulate such basic penalty points. 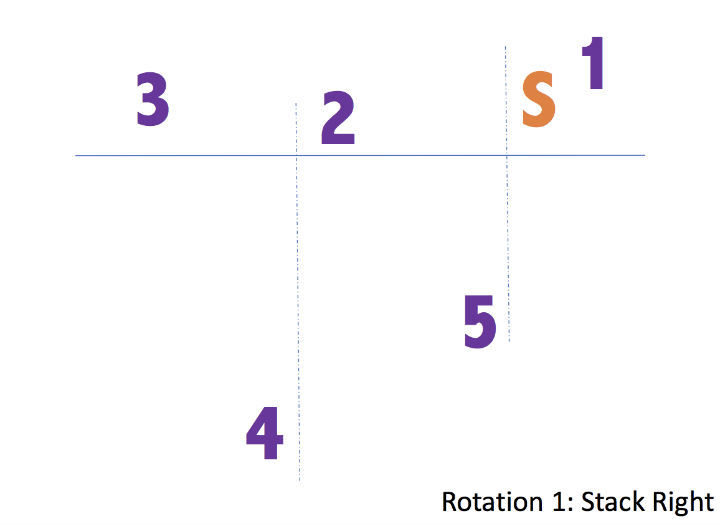 The first rotation manipulates the base set to ensure that your setter is primed and ready in the best possible position.

The setter pushes up to the front right of the net, without crossing in front of player one.

​(No overlapping front to back or side to side within a row, remember?)

Player three, who starts at front-left, drops back into serve-receive to assist four and five since the setter moved up.

As soon as the serve is contacted, the setter shifts toward the middle to their natural setting position. The others must simultaneously move into their hitting and coverage placements.

Remember the one overlapping precaution here...

The setter can’t cross in front of player one, nor cross closer to the middle than player five. 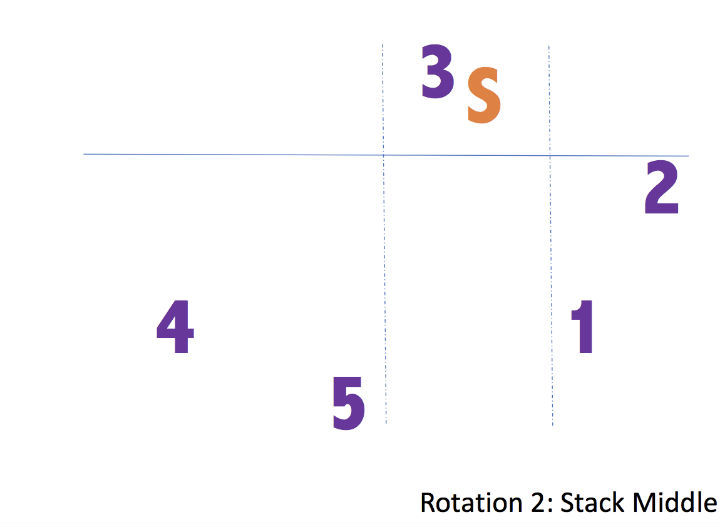 The second rotation also allows the setter to start quite close to their preferred setting placement.

The setter, having moved clockwise, is now in the back-middle position to start. From there, prior to serve-receive, the setter will push up player three.

Player four will drop back to assist five and one with serve-receive.

Once the serve is received, player three drops directly back to hit, with the setter already in position.

Again, there are some overlap concerns in this rotation to be very aware of, especially in the back row.

Since the setter is technically a back row player, they must be careful not to be crossed over by either player five or one in the back row. 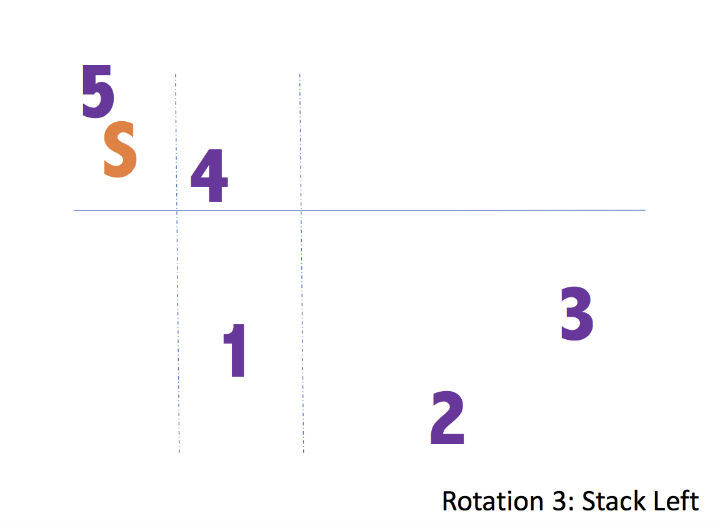 The third rotation is very similar to rotation one, just opposite.

The setter is now in the back left position to begin.

The setter pushes up player five to the net and pulls player four towards the left. This allows them quick access to their outside position.

This position is challenging for the setter, as they are quite far from their ideal setting placement.

As soon as the ball is contacted for service, the setter must sprint for their right-of-center positioning.

Player three, who started at right-front, will drop back to assist with serve receive.

The only real concern for overlapping is the setter leaving too soon for their spot and overlapping player one who is playing toward the left for serve receive. 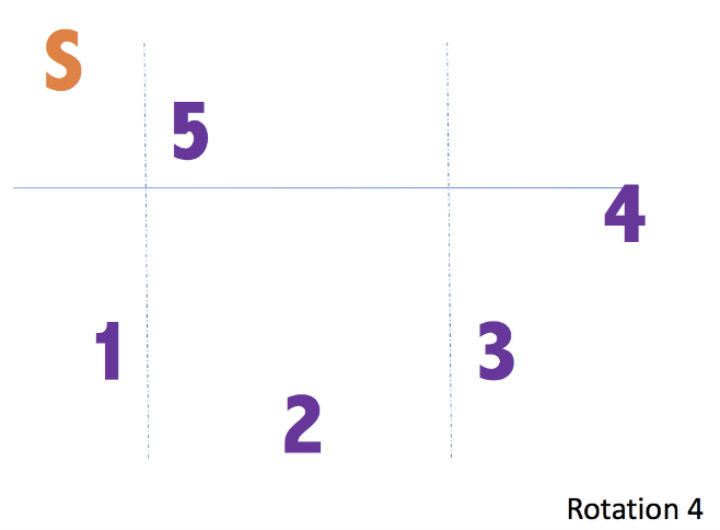 Rotation four introduces the setter to the front row.

This makes life much easier for everyone as overlapping becomes much less concerning.

The front row players must remain in appropriate numerical order but can be as close to each other as necessary, to facilitate the setter getting to their spot quickly.

Once the setter enters the front row, there is far more flexibility in player positioning.

This allows hitters to “switch” places with ease prior to running any offensive plays. 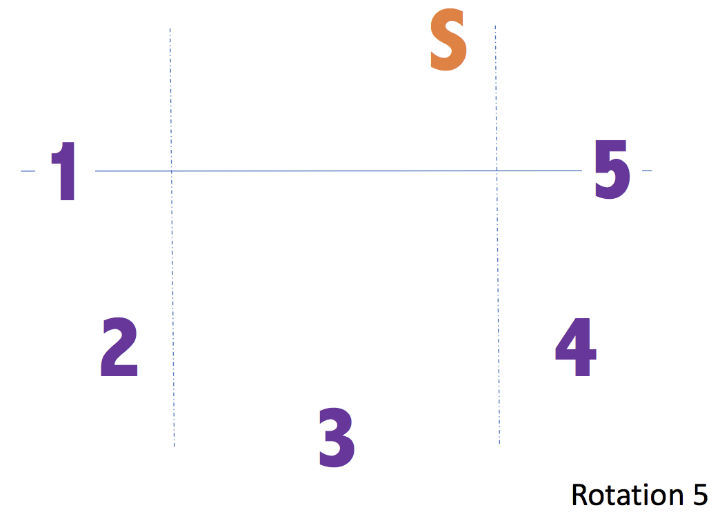 Rotation five is ideal as the setter is not in the front-middle position.

This is also a very flexible set up to run plays from.

The setter can even dictate passes be directed closer to the middle, eliminating a middle attack but allowing two outside hitters to make plays.

Alternatively, one of the players on the outside positions can slide to the middle to attack. 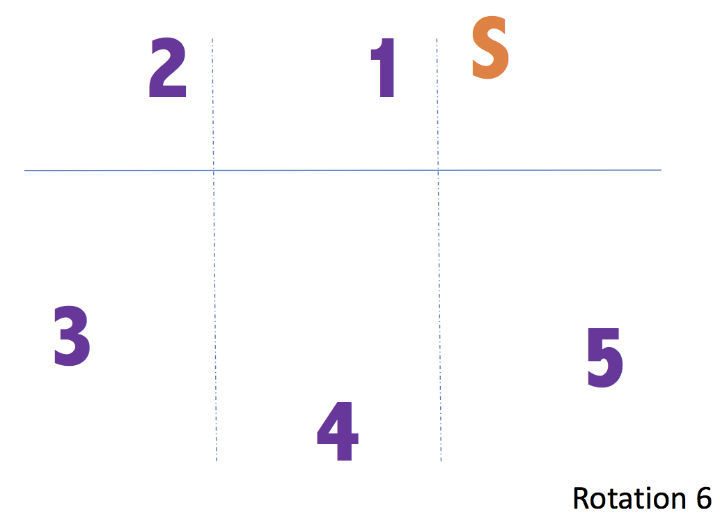 Rotation six represents the final step in the rotation before starting over.

The front row remains very flexible, as the setter is already in a position to easily set from at the front-right spot.

The hitters front-left and front-middle are able to hit from virtually any position they would like, as dictated by the setter’s play calling.

Often, a setter will set a back row player behind the ten foot line (3m line). This allows for an off the net attack to a deeper spot on the opponent’s court.

So where are we at finally with the 5-1 volleyball rotation system?

As you saw, the 5-1 makes for a really flexible formation that draws the most out of a team with a strong, versatile setter:

Once your team becomes adept at the rotation and its nuances, you’ll marvel at how fluid and liberating the 5-1 volleyball rotation system can be for your players.