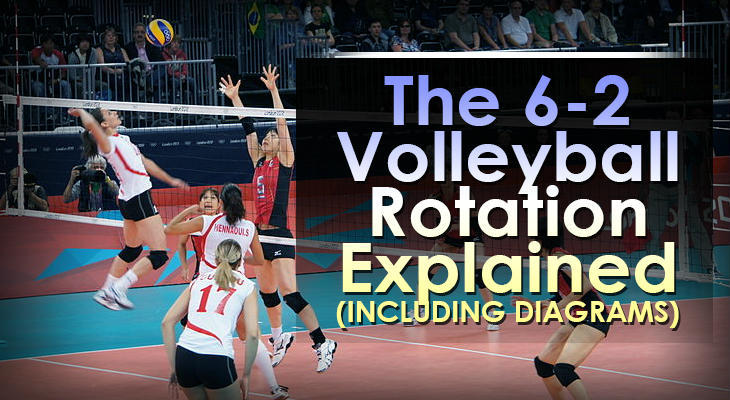 The 6-2 Volleyball Rotation Explained (Including Diagrams)

The 6-2 volleyball rotation is one of the most popular formations used in the sport.

The other being the 5-1 volleyball rotation.

Most coaches end up choosing between these two rotations to lay down the foundation for their team’s playing style.

When deciding which one to use, it comes down to the kind of players you have…

If you’re looking to operate an offensive hitting style with two setters, the 6-2 is your rotation of choice. But if you want to play with just one setter, the 5-1 is for you.

The first number in the name of the rotation indicates the hitters on the floor throughout a rotation. The second number stands for the number of setters.

So, a 6-2 volleyball rotation has six hitters and two setters on the floor at all times. It doesn’t matter that only one of the two setters is active at a given moment.

One of the two setters “turns into” a hitter when entering the front row, which maintains the team’s offensive structure. 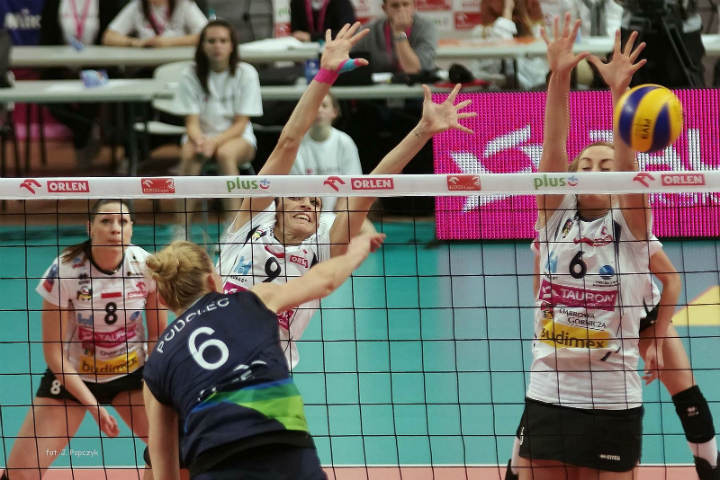 Strengths of the 6-2 Volleyball Rotation

Coaches must select their volleyball rotation based on the team’s strengths and weaknesses.

So, which kind of team would suit a 6-2 volleyball rotation?

The 6-2 volleyball rotation favours a team with more hitting options.

It does this by allowing teams to substitute more advanced hitters into the front row. This is assuming the setter is subbed out when entering the front row rotation.

Similarly, you can choose to sub-in taller hitters or blockers for your shorter setter.

Even in cases where substitution limits apply (international rules), the 6-2 offers great flexibility.

One of your two setters can play as the third hitter up front for your new back row setter.

Having three natural hitters along the front row at all times is the most obvious benefit provided by the 6-2 volleyball rotation.

If you have a nice mix of hitters on your squad, this can be an incredibly fun rotation to use.

A Second Setter on the Floor

Another advantage of the 6-2 volleyball rotation is that you’ll have two setters on the floor at all times (obviously).

This allows teams to be more flexible with serve receive, not having to worry as much about the setter taking the first pass and being deemed “out” for the set.

Even if the setter in the back row is eliminated through the serve-receive, you’ll still have one more up front.

The setter in the front row can set in these cases, allowing for the team to run some form of quality play out of a setter first pass scenario. 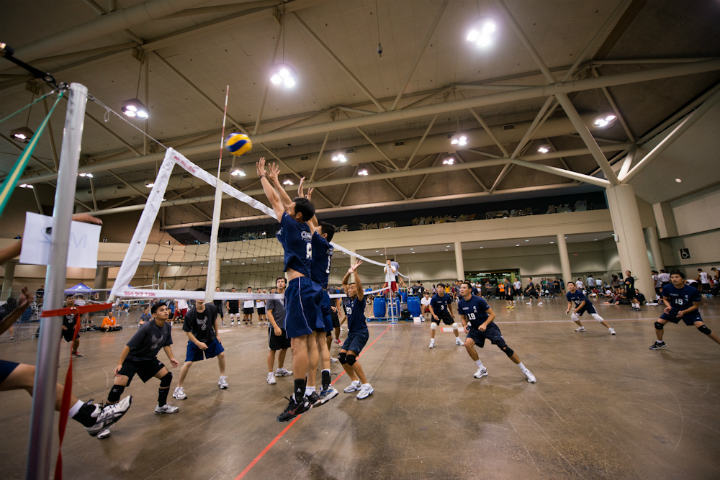 Weaknesses of the 6-2 Volleyball Rotation

There are always some negatives to consider when deciding what rotation to use.

Here are a few potential negatives:

The most obvious one is you must have two quality setters available.

Whether both setters are on the floor at the same time or they are being subbed out of the front row, two will be utilized throughout the match.

They both must be good enough to lead the team independently.

Playing With Two Setters Can Be Complicated

Playing different setters in the same match can be a big challenge for your hitters.

For the following reason…

The setter and hitter relationship is typically built on their understanding of each other and the consistency of their moves.

When a second setter is entered into the equation, a hitter must adapt to two different styles.

This can be incredibly hard to switch back and forth between within the same game.

These inconsistencies can certainly be a challenge for hitters and setters alike, possibly leading to some inefficiencies and errors in offense.

The Substitution Rule Can Create a Challenge

We pointed out the advantages of the 6-2 volleyball rotation presents when it comes to the options available through substitutions.

But there is also a negative side…

The substitution rule can make things challenging for the coach, limiting options to switch in players as needed in offence.

With two strong setters, who can both hit equally as well, the 6-2 rotation provides a solid attack and options in the passing game.

The 6-2 rotation relies heavily on substitutions to load up on hitters during offensive plays.

So it’s not all that uncommon that teams find themselves limited in substitutions, especially with the use double subs. 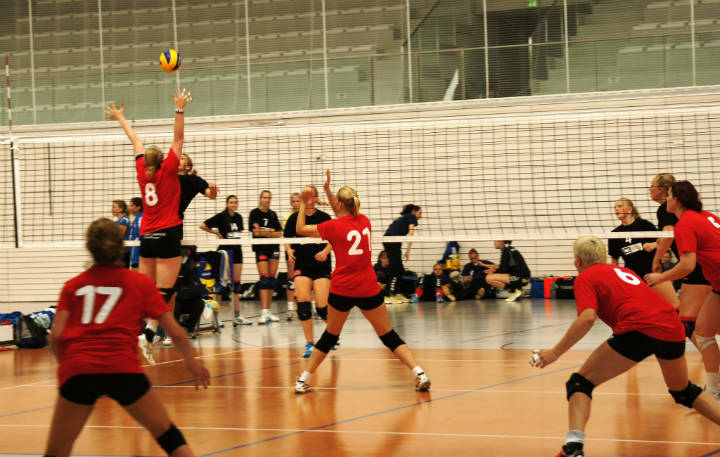 Basics of the 6-2 Volleyball Rotation

By now you should know whether the 6-2 volleyball rotation is a good fit for your side.

If you feel that it’s the way to go, it’s time to learn how the system actually works.

Before we get into the actual rotations involved in the 6-2 formation, there are some basic principles you should know…

1. The standard location for the back-row (or active) setter after the first pass is right of the middle, around two feet off the net.

Regardless of where the setter begins the play, the pass should always be intended for the same location.

While the setter may not be able to make perfect position each play, whether due to a bad pass or some other variable, having a standard starting point allows for consistency and predictably.

2. Players should go straight for their assigned positions as soon as the opponent serves

Ideally, players will be in position before, or as, the ball is crossing the net.

Setters should be heading to their right of center location, while hitters are preparing for hitting approach.

This allows for a seamless transition into the offensive play.

3. Players must be aware which setter is active, and follow their lead

The setter dictates the offense, hitting strategy, and all variables in the game plan.

They are the primary source of information for the team and attention must be paid to their instruction during and between plays.

The setter in the back row takes over all setting duties, aside from them taking the first pass, and control of the offense.

Similar to the 5-1 rotation, the goal in 6-2 serve-receive is to hide the back-row setter as much as possible.

This allows the team to seamlessly flow into offense, without having to scramble.

The ideal scenario is always to have the back-row setter available to set while the three front-row hitters are in perfect position to run the pre-determined offensive play.

The Rotations Involved in a 6-2 Formation

The discussion of the 6-2 volleyball rotation can be challenging, as there are two of each position on the floor at all times.

1. A front-row setter can be substituted out for an opposite hitter.

2. Back-row hitters are often substituted out for a stronger defensive player or libero.

3. For the sake of this description, both setters will remain on the floor for the entirety of the rotation.

4. The two setters will always be placed in opposite positions in the front and back rows. This is done so there is always one setter available at the back after rotations.

8. Overlap should always be considered when in serve receive positions, ensuring not to cross the player in front of or beside you before the service is hit. 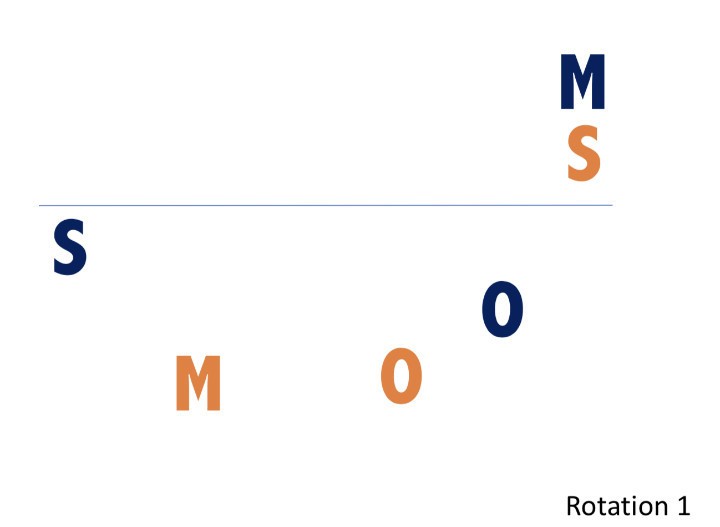 In some cases, the inactive setter will be replaced with an opposite hitter but for this description the setter will remain on the court.

In rotation one serve receive, the active setter pushes the middle player in position six up to the net. This allows the setter to be close to ideal setting position right away.

The player in position four will drop back slightly, providing good passing coverage.

The setter is completely protected from being the first pass in this rotation, barring a very short serve. 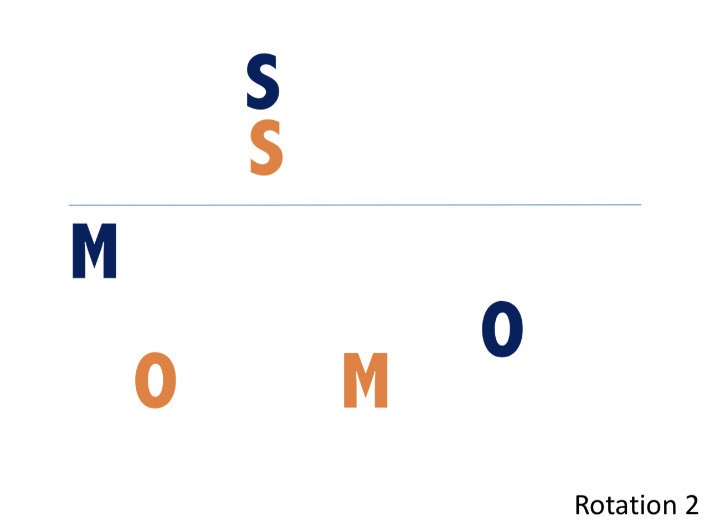 One or both hitters that are in position two and four can drop back to assist with serve-receive, depending on passing skill and need.

However, it is important to remember a hitter who takes first pass can have a difficult time getting to a quality hitting position.

These factors can be taken into consideration when deciding who will drop back to help with the serve-receive. 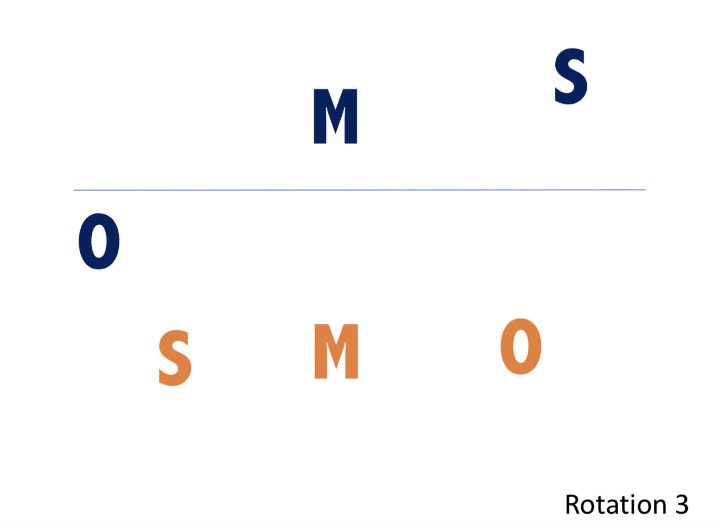 Rotation three can be approached in different ways.

In this case, the active setter is quite far from the ideal setting position and must hustle to get there in time for a good set.

Alternatively, the front-row setter is in position two and could be utilized to make the first set.

While this eliminates a front-row hitting option, it does ensure a quality set from this serve-receive.

This also allows the back-row setter to engage as a passer, freeing the player in position four to be ready to attack.

Rotation three in a 6-2 rotation is probably the most diverse serve-receive.

As a coach, you must weigh up each player’s abilities and skill while determining their best serve-receive positions. 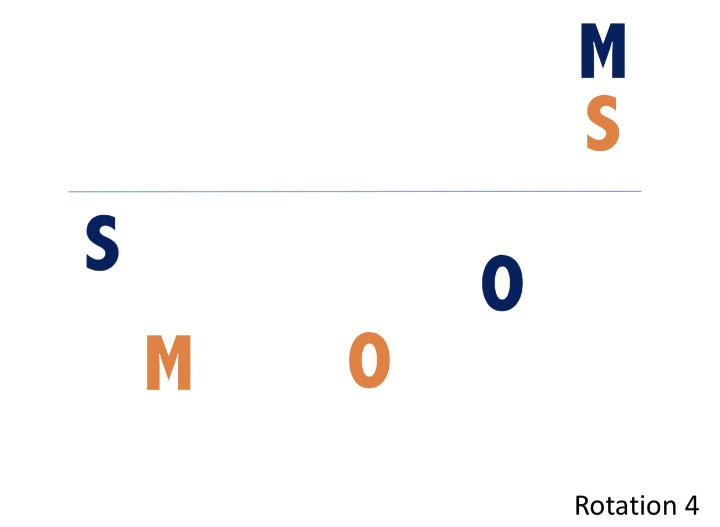 At this point, the original active setter enters the front row in position four. Or, the new front-row setter could be substituted for a stronger hitter.

In the United States, where substitution rules rarely apply, a hitter will typically sub in at this time. However, if substitution limits are in place, the setter will become the opposite hitter in most cases.

At this point, all serve-receive patterns repeat since there is a second setter on the floor.

In the rotation four serve-receive, the active setter pushes the middle player in position six up to the net. This allows the setter to be close to ideal setting position right away.

The player in position four will drop back slightly, providing good passing coverage.

Again, the active setter should be protected from being the first pass during serve-receive, barring a very short serve. 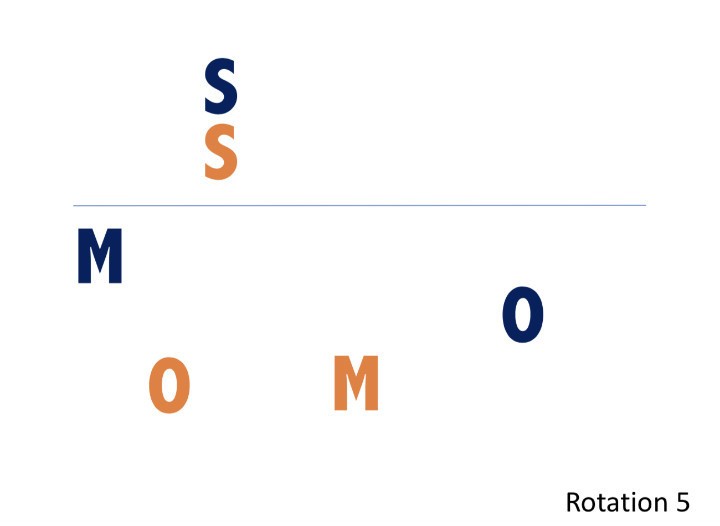 The active setter presses up to the inactive setter to get into an ideal setting position just like in rotation two.

One or both hitters that are in position two and four can drop back to assist with serve-receive.

Again, be mindful of a hitter taking the first pass, which makes it hard for them to then get to a quality hitting position. 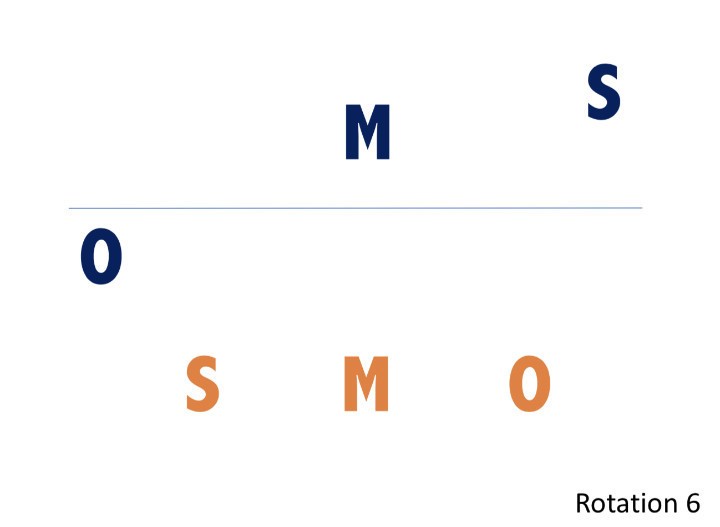 Like rotation three, rotation six can be approached in different ways.

In this case, the active setter is quite far from the ideal setting position and must hustle to ‘get there’ in time for a good set.

Alternatively, the front-row setter is in position two and could be utilized to make the first set. While this eliminates a front-row attacking option, it does ensure a quality set from this serve receive.

This also allows the back-row setter to engage as a passer, freeing the player in position four to be ready to attack.

Rotation three in a 6-2 rotation is probably the most diverse serve receive, with player skillset weighing heavily on the choice of serve-receive positioning.

The 6-2 volleyball rotation is an excellent choice for offensively inclined teams that have two very good setters.

And it can be particularly devastating when the team also has a variety of effective hitters in various positions that the two setters can exploit in different patterns.

However, it is also highly dependent on substitution rules.

With free, limitless substitutions, the 6-2 allows for the ideal players for each position to be on the floor.

However, substitution limitations create the need for a much more tactical thought process.

In any case, it’s a system which brings the most out of offensive sides with the players to make it work. And it’s certainly an exciting system to work with for coaches.

I would choose the 6-2 because im an offence type of player and its good to have someone on the offenceive style with you.