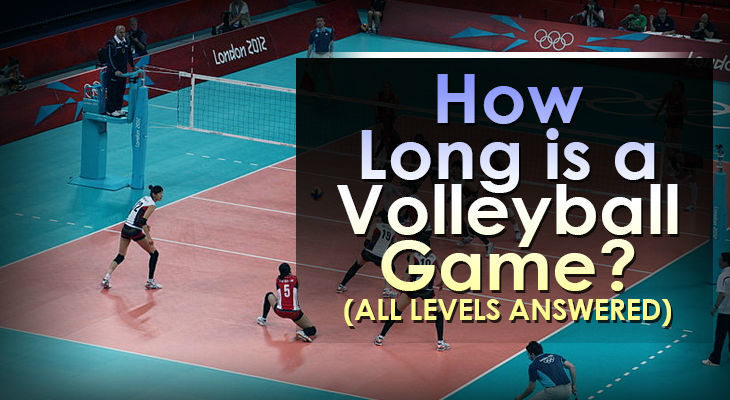 How Long is a Volleyball Game? (All Levels Answered)

Many factors can impact the duration including skill level, rally length, and game rules.

It is virtually impossible to nail down how long a volleyball match will last before it begins but there are some factors that certainly impact the length of a game.

Each level of the sport has its own unique factors that will shorten or lengthen the overall time a match takes.

But to give you some idea…

Most volleyball matches last between 60 and 90 minutes.

And the duration of a typical single volleyball game is 20 - 25 minutes long.

How Long is a Volleyball Game for Junior High School and Youth Volleyball?

Most games are played in a ‘best of three’ format. Meaning the winner is the first team to win two games out of three.

While this sounds as if it could shorten a match as compared to longer formats, it is important to remember that the skill level is not quite as high as other levels.

Rallies can last longer as the lower levels of play have difficulty with the aggressive kills and set plays of other levels.

Substitutions may take longer as well as the patterns might not be as fluid as they are at a higher level.

How Long is a High School Volleyball Game?

The majority of high school level leagues play a ‘best of five’ format. Meaning the winner is the first team to win three games out of five.

The variables of length begin to present themselves at this level, as teams may quickly win a match 3-0 or a match can be drawn out to a 3-2 outcome.

At the high school level and above, games typically are won by the first team to 25 points.

The winning team must win by two points or greater.

If the match goes to a fifth game to determine the winning team, it is typically played to 15 points.

The win by two rule still applies in the shortened last game.

How Long is a College Volleyball Game?

The highest levels of volleyball are certainly the college and international levels of play.

At this level, athletes are often quite good at their positions and frequently kill rallies quickly.

Obviously each game presents unique outcomes, but elite volleyball is typically the most expedient.

Substitution patterns are well known and do not take excessive time and quick service is typical.

This level of volleyball maintains the same scoring and best of five games as the high school level.

The disparity in skill level in addition to many in-game variables can certainly contribute to the length of a volleyball game.

Which makes ‘how long is a volleyball game’ a tough question to answer.

Accommodations have been made to ensure the lower level athletes can still complete a match in an acceptable time frame that keeps the game interesting and fun to play.