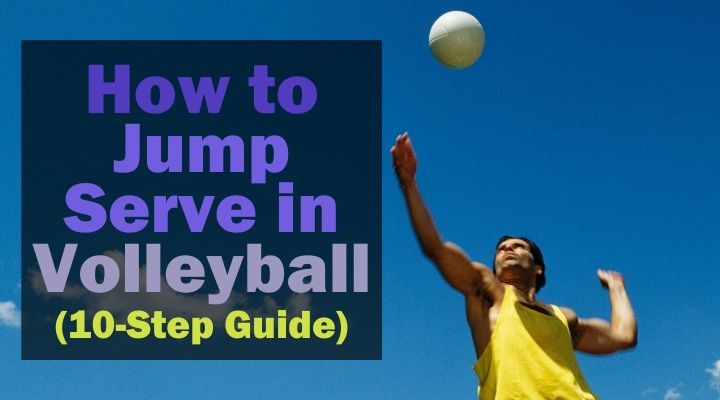 How to Jump Serve in Volleyball (10-Step Guide)

The serve is an integral piece for scoring in volleyball.

It allows your team to initiate an attack without the potential for being blocked.

The best serves are:

A jump serve is an awe-inspiring moment in a volleyball match but should be a reliable weapon rather than a cross-your-fingers-and-hope-for-the-best moment.

None other than the great Brazilian volleyball player Renan Dal Zotto is credited with bringing the jump serve to competition.

The jump serve was to volleyball at the time what dunking was to basketball after it was made legal.

Most volleyball historians point to the 1984 Summer Olympics as the first notable jump serves in international play.

Overview of the Jump Serve

The jump serve is very hard.

Even the absolute best players struggle with maintaining control over the ball when attempting to jump serve.

But when it’s done well, it’s powerful and extremely hard to return by the receiving team.

There are several types of jump serves when it comes to the movement of the ball, but the most common is a ball that rapidly sinks and has significant pace.

If players intend to use the jump serve in competition, they must practice it frequently.

One could argue that it requires more practice than a typical serve.

Like a “normal” serve, players must develop a jump serving routine that provides consistency in their toss, approach, and follow-through.

Here are ten steps to learn how to jump serve and make sure it’s reliable, accurate, and effective. 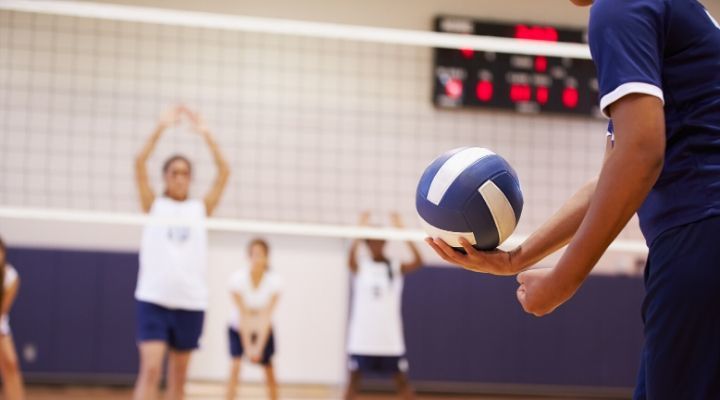 How to Jump Serve in 10 Steps

Finding a quiet moment amid the chaos of a volleyball match is difficult.

For those who intend on executing a difficult jump serve, it’s a must.

Players must clear their heads to prepare for the necessary routine of the jump serve.

The goal of a good server should be to approach each serve the same way every time.

Before starting any form of routine, take a moment to breathe and clear your mind.

The importance of routine while jump serving can’t be overstated.

Players must practice the movements enough that it feels like second nature as they begin the act of jump serving.

Develop a separate routine for your jump serve.

Don’t go through the same introductory motions as your regular serve.

By having a different routine for your jump serves, your body will receive cues to guide your motions into a jump serve.

It’s not something you do by toeing the end line like a regular serve.

There are varying opinions on how much room jump servers should need.

We’ll give you a good starting point here that you can work from to make comfortable and natural for yourself. The last thing we want to see is a bunch of unathletic robots on the court!

A good way to find a starting spot for your serve is to start with your heels on the end line and facing away from the net.

The point at which you “take-off” for your swing would be where you should start your jump serve for now. 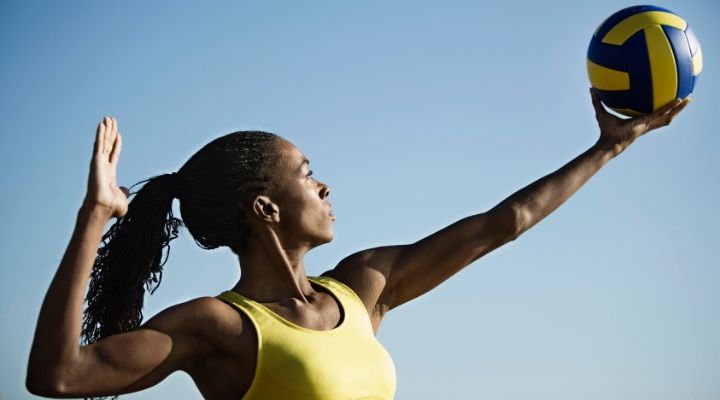 Step Four - Start with an Approach

Now that you know where to start, run through your typical approach a few times.

Take note of where you take off each time.

Get to that take-off point and look up into the air.

This is where your toss should be for you to attack the ball.

Your posture should be athletic as you stand waiting to toss the volleyball and begin your jump serve.

Your feet should be about shoulder-width apart.

Your right foot (for righties – flip it for lefties) should be just further forward than your left.

The ball should be held in both or one of your hands with a strong but relaxed grip.

The toss is the most difficult part of the jump serve for almost everyone.

Because it has to be precise and consistent to execute a high-quality serve every time.

There are several ways to get the toss to a point you can rely on it.

1. Hold the ball in two hands.

Players like the two-handed approach because it can be easier to make a consistent toss at first.

Some dislike it because it’s difficult to toss with topspin, making serve accuracy less reliable.

The two-handed toss is great for a jump float to serve (see below).

Toss the ball between 10 and 12 feet into the air with the goal of it landing at your attack point.

Some suggest that the ball should land about a foot inside the end line.

This is a good landmark to start with.

2. Hold the ball in your dominant hand.

Players like the dominant hand toss, as it makes timing their approach easier.

For those tossing with their dominant hand, it’s best practice to start by holding the ball in the palm and fingertips near shoulder height directly in front of you.

The toss should follow the same trajectory as a two-handed toss but should feature more topspin.

Achieve consistent spin by flicking the wrist upward and pulling the fingers toward you as the ball is released.

3. Hold the ball in your non-dominant hand.

This is the least used toss but some players like it for timing purposes.

It can make the approach look a little uncoordinated, but some players find it simpler.

This toss is challenging for those who struggle with their non-dominant hand and arm strength.

The ball should be held in the palm and fingertips near shoulder height straight out in front of you.

The toss should follow the same trajectory as a two-handed toss but should feature more top spin.

An upward flick of the wrist will help create more topspin.

The timing of a jump serve is complicated and relies on a near-perfect toss every time.

The approach to a jump serve is similar to the approach you use when hitting.

The approach generates the force that makes a jump serve so powerful.

The difference in a jump serve approach is that your dominant foot moves first to create a “fourth step” in the three-step approach.

The first movement is subtle and shifts the weight from your heels to your toes in your dominant foot.

Next, use your typical left, right, left motion (flip it for lefties). You may have to extend or decrease your stride length to track under the toss.

You should be comfortable enough with your footwork that you can keep your eyes focused on the ball the entire time it’s in the air.

This will allow you to adjust to any unexpected movements from the toss. 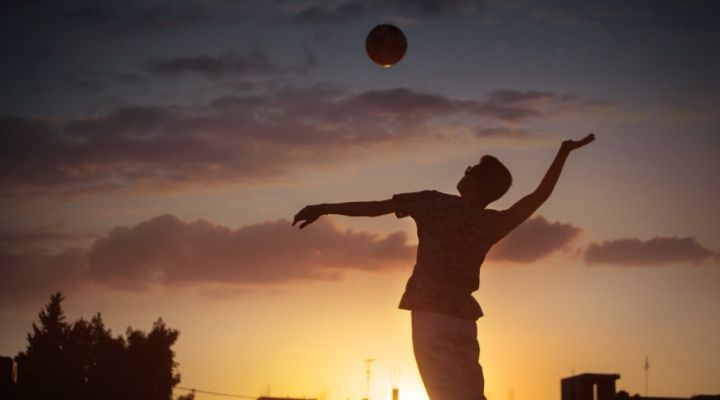 Step Eight - Good Tosses are High in the Sky

As you get better at what to expect from your toss, get it as high as you can.

This will allow time for any adjustments to your approach and swing.

A low toss speeds up the process of a jump serve and is a bad habit to form.

Now it’s time to have fun.

Most jump serves are given the all-clear to let it rip.

While aiming your serve is still important, a jump serve’s threat comes with its power.

Contacting a jump serve should be the same as contacting your kill shot.

Use your legs and core to explode up to, through, and down on the ball.

Plan to strike the ball as high as possible.

This ensures the ball has a chance to clear the net and provides room for some mishits.

Hit the ball toward the top and snap your wrist to create more downspin for increased pace and to get the ball in bounds.

After contacting the ball, you should follow through with your arm swing to avoid shoulder injuries.

Your arm and hand should swing through the ball and finish down near your waist.

You’re allowed to land anywhere on the court.

You must take off before the end line but it’s perfectly acceptable and normal to land in the playing area.

Let your momentum carry you to your defensive position to finish off a perfect jump serve.

The jump serve can be deadly for your opponent.

However, there are times when they might get good at returning your regular jump serve.

Use the jump float serve to catch your opponent off guard when they’re expecting the usual topspin.

You can use two hands to toss the jump float serve, which may help control the topspin.

Your approach will be much shorter, and your “jump” will look more like a hop than a full attack.

Contact the ball lower than usual, more toward the middle.

Avoid too much wrist snap to prohibit topspin.

The ball should come out flat with very little spin.

Use your core strength to promote speed on the jump float serve.

A jump serve can take you from being considered a good player to being seen as a great volleyball player.

Nothing strikes fear in your match opponent more than seeing a player destroy jump serves in serving warmups.

The true “secret” in perfecting how to jump serve is practicing it regularly.

Timing is very important and the only way to get it right is by trying over and over.