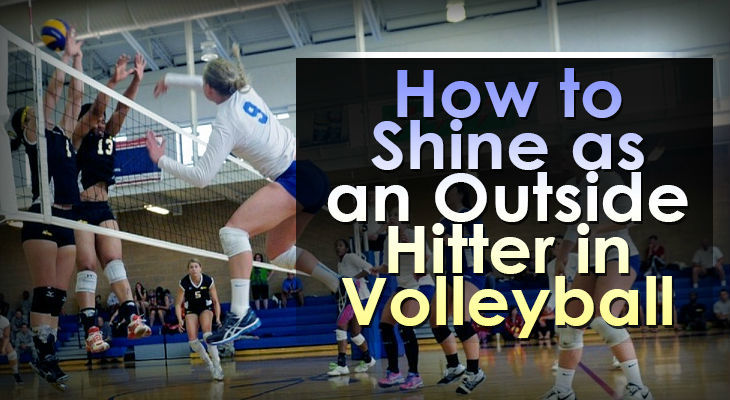 How to Shine as an Outside Hitter in Volleyball

Volleyball is a sport which requires everyone on the floor to be on the same page.

The team needs to move as one and the players must make smart team-focused decisions to put the entire group in a position to be successful.

One of the most important positions to achieve team success is the outside hitter.

The outside hitter plays on the front left side of the court.

Also know as the strong side or power hitter, they are tasked with a large amount of responsibility on both offense and defense.

The best of the best have several traits and have develop skills that allow them to truly steal the show.

Let’s take a look at what they are… 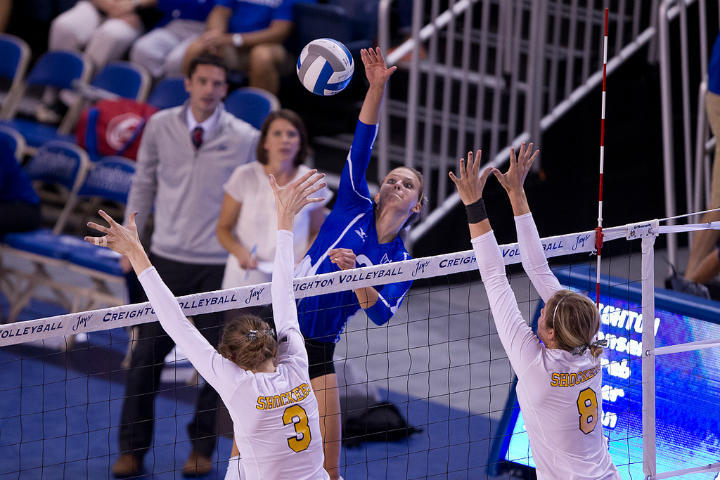 6 Traits of a Great Outside Hitter

The outside hitter position is one which most volleyball players at a higher level will have played at some point during their volleyball career.

It’s a desired position for younger athletes as most of the game’s action tends to run through the strong side at the lower levels.

As an athlete matures, there are several traits that reveal themselves as keys to being a great outside hitter.

Here are six of the most important…

While they’re not usually the tallest player on the team, the outside hitter does find themselves attacking quite often.

Height helps by providing the ability to hit over blocks and find the best angle to attack.

The strong side is often hitting against a block from the opponent’s setter and any height advantage is beneficial.

The outside hitters also get involved in quite a few blocking scenarios defensively and a taller player has an easier time defending the opponent at the net.

They could be blocking one second and then suddenly digging the next.

While all volleyball players must be athletic, the outside hitter must be particularly agile.

To go from one responsibility to the next quickly requires elite athleticism.

For someone who makes their name on attacking, the outside hitter has a significant amount of passing responsibility.

In addition to the libero, the outside will drop into serve-receive to assist with passing.

It is an expectation that the person playing strong side will provide a consistent, accurate pass to the setter to start the offense.

Also, the outside will often drop into coverage defensively and must be prepared to effectively dig opponent attacks.

The strong side and middle must be in constant communication talking about what their opponent is trying to accomplish offensively.

The outside hitter is responsible for notifying the middle of where opposing hitters are and where they are going.

This level of communication can only be accomplished by an intelligent outside hitter who is great at reading the opponent.

With quality information, the outside allows the middle to anticipate attacks and provide the most effective help on the block.

While being right handed or ambidextrous is not a set-in-stone requirement, it’s certainly an advantage for the strong side to hit with their right hand.

This allows the ball to be hit in a natural motion without it crossing the body of the hitter.

The hitter can then really crank up the power and the opportunity for the kill increases.

The outside hitter often finds themselves in a position to recover plays that have gone poorly.

Whether it’s a terrible pass which leads to a bad set or a miscommunication that throws the play off entirely, the outside must be prepared to create something out of nothing.

The high outside set is the easiest for a setter out of position, so often the “junk” balls will come to the strong side hitter. 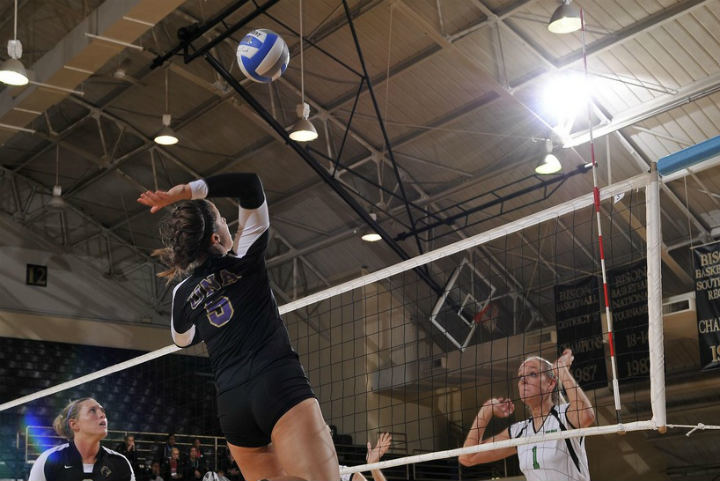 Responsibilities of an Outside Hitter

The outside hitter has the most diverse set of responsibilities on the court.

They’re often great athletes and always ready to make a play regardless of what’s happened so far in the rally.

1. Ready to Hit at All Times

As mentioned earlier in the article, the easiest set to place is the one that is high and outside to the front left antenna.

This means that if a setter or their fill-in on a busted play is in trouble, then the set is headed for the outside hitter on most occasions.

Regardless of the quality or location of the set, the strong side is expected to make a quality swing.

They also have the benefit of the cross court shot which provides the most space to get a ball into. This means they’re expected to land a high percentage of their swings in play.

2. Safety Valve for Setters While in the Back Row

If a setter chooses to set the three meter, or ten-foot line, then the strong side hitter in the back row is typically the one to hit the shot.

This is another scenario where the outside must be constantly aware of what is happening on the court.

They cannot simply lounge on offense while in the back row.

3. Accountable for Both Blocking and Passing

While in the front row, the outside hitter is responsible to set the block for the middle on plays to their end of the net.

Often the outside hitter is given instructions from the coaching staff on whether to set the block for the line shot or not and must set it accordingly.

The middle comes over to complete the block and the outside must hold their own by being able to penetrate the net.

If the block is not set appropriately, it becomes ineffective by allowing the opponent an easier window to hit through.

An outside hitter is also responsible for serve receive.

They typically will assist the libero with serve receive duties and are expected to be just as consistent a passer as the libero.

A good first pass typically equates to an effective offense, so a questionable passer cannot fill the strong side position.

Outside hitters also find themselves attempting quite a few digs, as some rotations put them in position to pass defensively while in the back row or not setting a block. 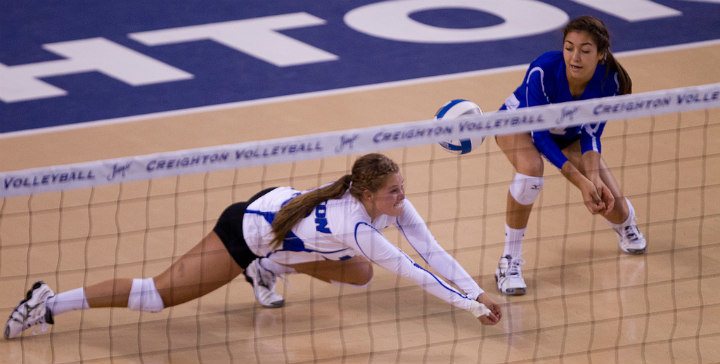 The outside hitter must be one of the best all-around players as they have a major role in passing, blocking and hitting.

Six Tips to Shine as an Outside Hitter

The outside hitter must prioritise development in all areas as they require elite skills in every part of the game.

They must jump up high, dive down low, move side to side and get back up as quickly as humanly possible.

This means it’s clearly advantageous for an outside hitter to work on their flexibility and explosiveness along with their volleyball skills.

When developed over time, this will allow an outside hitter to separate themselves from the rest of the athletes on the floor.

The outside hitter rarely surprises an opponent with their attack.

Opponents will always always be prepared for them as a high percentage of offensive attacks come through the strong side in every game.

Because of this, the hitter playing in that position must be able to over power their opponent.

A weak shot from the outside hitter becomes an easy play for the opposition.

Core strength is essential to providing the hitting power that an outside hitter needs to be a successful attacker.

Focusing on strengthening the core will give an outside hitter the opportunity to be great.

The outside hitter is expected to be prepared to hit any type of set that comes their way.

As the safety valve, not all sets will be perfect and allow for the ideal approach steps.

Great outside hitters can use a variety of approaches, dependent on the type of set, which allows them to still generate power on what the average player considers a bad set.

4. Develop a Variety of Shots

Again, not every set to the outside hitter is going to be perfect.

The strong side position can often see some ugly sets.

The most successful outside hitters develop an arsenal of open hand shots which allows them to turn a rough set into an attacking opportunity.

Develop ways to put top spin and side spin on the ball without using a full swing.

This will allow the strong side hitter to still attack even if a standard approach and swing is not an option.

5. Spread the Ball Around

There is nothing easier for an opponent than an outside hitter who hits the exact same shot every single time.

Weak outside hitters are often seen hitting the cross court shot time and time again as they lack confidence in their ability to hit down the line or anywhere else on the court.

It is vital that the strong side hitter is able to hit the shot most likely to land on the court.

If the opponent is out of position and presents them with an opportunity, the best outside hitters hit whatever shot is open.

Great outside hitters love to pass.

A quality outside hitter is an asset to their team because of their versatility.

A strong side player that is a great hitter but is an exceptionally poor passer is virtually useless to the all-around performance of the team.

Practicing the pass cannot be forgotten if a player wants to perform at their best as an outside hitter.

In a team sport like volleyball, it is difficult to pin down who is the most important player on the court.

And, of course, ‘the best’ will vary depending on a lot of factors.

However, it is easy to identify the most versatile…

The outside hitter is not only responsible for all facets of the volleyball skill set, but they are expected to be great at all of them.

An outside hitter that shines can accomplish any task the flow of the game requires and is prepared to pass, hit, or block at any given moment.

Understanding Volleyball Zones While Serving (Where to Attack) - April 20, 2020