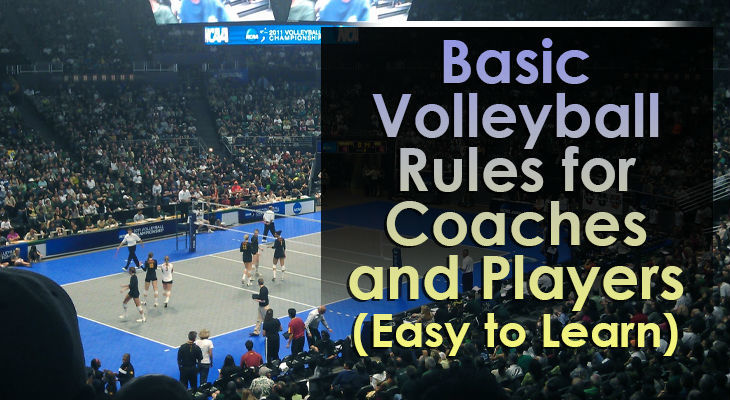 Basic Volleyball Rules for Coaches and Players (Easy to Learn)

At first glance, volleyball looks like an easy enough sport to grasp…

The goal is to get the ball over the net and ensure the other team does not do the same.

The game is certainly built on that foundation, but there are many volleyball rules and regulations involved that a casual onlooker may not immediately understand.

In this post, I’ll explain them all for you.

A good understanding of the basic rules of volleyball is essential for all coaches, players, and parents who want to enjoy watching or playing the game.

Number of Players on the Court

Like any sport, each side is limited to a certain number of players on the court at any given time.

There are several formats of volleyball, each allowing its own number of players on the court.

Four-Person Team - Often featured in tournaments, especially co-ed tournaments featuring both sexes on the court at the same time. 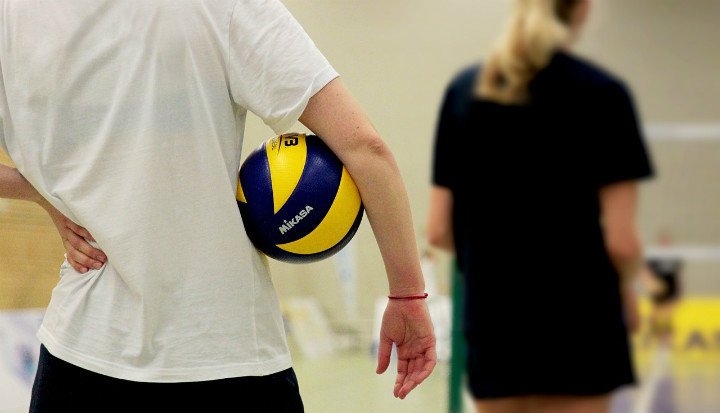 Each point begins with a serve, so it’s vital to understand the rules behind it.

Especially if you want to learn how to be a great server.

Here are the 3 rules to service:

1. The ball must be tossed before striking it

It cannot be bounced off the ground or even hit directly from the non-hitting hand.

Both overhand and underhand serves are legal, as long as the ball is not in contact with both hands at the same time.

2. Serves must take place behind the “back line” and inside of the “sidelines”

A player may not contact either of these lines with their foot before the serve has been hit.

Once the ball is struck, the line rules disappear, and the player can land in the court if necessary.

3. The ball can touch the net, as long as it goes into the opponent's’ court

No players on the serving team may touch the ball before it passes over the net.

Also, the serve must not contact the antennae that mark the side lines at the net.

It’s also important to remember that if a referee is present, servers must wait for the clearance to serve from the referee.

This ensures that all players on both teams are ready for the service to take place.

When receiving serve, players have a decision to make...

If the ball appears to be headed out of bounds, they can elect to simply let it travel out.

Alternately, if the ball appears to be headed in bounds, the receiving team should elect to play the ball and pass it to a teammate to start on the offensive.

Once the decision to pass is made, the receiving team has a total of two more hits to put the ball over the net to the opposing court.

In advanced levels of volleyball, keeping track of rotation can be challenging.

This is because players align themselves in the most efficient way to ensure they are in rotation, but are immediately ready to play their dominant positions.

But on a basic level, the volleyball rotation rules are quite easy to understand.

Players must stay in a fixed rotation that moves clockwise each time a serve is gained after a “side out” (the moment the opposing team loses their serve).

This allows all players to take turns serving throughout a set and match.

Two-player volleyball is unique in that it does not require court rotation. However, players must alternate serves after each “side out”.

Rotation also limits where players can play on the court during any point.

Players in the back three rotational spots (behind the three-meter line) may not attack a ball from in front of that line. But they can attack the ball from behind the line.

There are two forms of volleyball scoring that have been briefly mentioned thus far.

Side out scoring dictates that only the serving team can score a point.

If playing side out scoring, the receiving team is playing for the opportunity to serve.

Rally scoring allows both teams the opportunity to score on every play.

There are several ways to score (and/or side out) in the sport of volleyball.

If the serving team wins the point, the same server will get the opportunity to serve again and continue to serve until the opponent scores or sides out.

If the opposing team scores or achieves side out, they will then rotate and serve accordingly.

Players can utilize any body part to play the ball.

Any attacking shot (a shot with intent to score over the net) must be played with a body part from the waist up – typically hands are best.

1. Carrying the Ball - Lifting the ball rather than hitting it, typically occurring in the setting motion.

2. Double Touching - Striking the ball rapidly with each hand, also most common whilst setting. 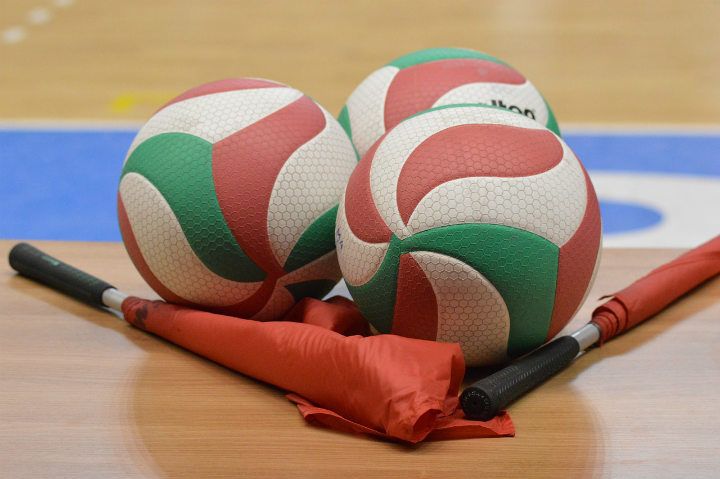 The offside rules in volleyball are in no way similar to those of other sports.

These offside rulings are in relation to crossing into the opponent’s court for various reasons.

Two-Player Volleyball - A player may go under the net in the course of play, but they must not interfere with the opponent’s play.

Four-Player and Six-Player Volleyball - Players may not cross under the net.

If this violation does occur, the opponent is awarded a point (or the ball in cases of side out scoring and receiving serve).

Players are deemed to have committed a “net violation” or “net foul” if they touch the net or net cord during play.

The penalty is the same as for crossing under the net.

Players are not to cross the net above the top of the net either.

Going by specific volleyball rules, players may not touch an opponent across the net or play the ball on the opponent’s side of the net.

However, lenience is given to many blocking situations as blocking without net penetration is extremely difficult.

There are several other violations that can result in a variety of penalties.

Service Violation: Touching the end line before or during striking the ball.

Net Contact: Contacting the net with any body part while the ball is in play (aside from when the ball itself causes the contact).

Serving Rotation Violation: Serving out of the correct rotational order set at the beginning of a set.

Back Row Violation: Either blocking or attacking as a back-row player in front of the three-meter line.

A good understanding of the many volleyball rules in our great game is essential if you’re planning to watch, play, or coach.

While some of the deeper rules and regulations can be complicated and challenging to understand, the basics rules of volleyball are fairly simple.

If you take some time to study this guide…

You’ll have confidence in your volleyball knowledge regardless of which role you’re filling.