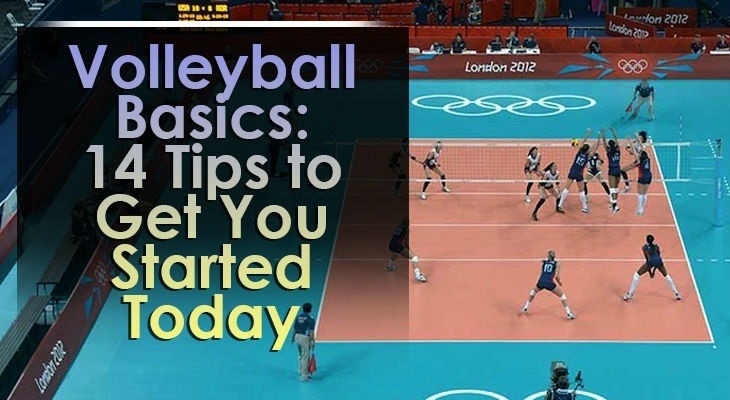 Volleyball Basics: 14 Tips to Get You Started Today

The beauty of the sport called volleyball is that it’s remarkably simple to learn.

A few volleyball basics exist to keep the game moving but there are very few nuanced regulations, unlike soccer, hockey, and American football.

Learning the rules like three hits to get it over, don’t touch the net, and the line is in, is an obvious start.

Getting a grasp on rotations and the purpose of the three-meter line could take some time but a few matches of repetition should solidify a player’s understanding of those.

Rules are rules but there are other aspects of the sport that will help players new to the game feel comfortable getting out on the court.

Here are 15 tips that you won’t read in a book of rules and regulations, but you will be happy you know.

1. Three for the Win

Volleyball rules allow three contacts per side to defend, set up, and attack.

One of the most common signs a player is uncomfortable is their natural reaction to just “get the ball over the net”, regardless of how many times the ball has been contacted.

Of course, there are scenarios when attacking the second contact are viable strategies.

The point of this tip is to think about what you are doing when you are contacting the ball.

Similar to the first tip, this one is aimed at new players who might be responding to their natural reactions rather than actively thinking about what they are doing.

The setter’s job is simple:

Some players get antsy when the ball is nearby and assume they need to keep it in the air.

The setter should communicate their intent to take the second hit (more on communication next) but other players should also be willing to trust the setter to do her job.

The second ball is for the setter unless she indicates otherwise, or the play is clearly broken.

One of the most frustrating occurrences is watching two players go for the same ball and seeing the volleyball hit the floor as the players stare at each other.

The best teams know each other extremely well and still make it a point to verbally indicate their intentions.

Beginner-level players tend to clam up when the ball is in the air.

This is usually caused by their insecurity in their skills or inability to think about anything other than playing the ball.

Communication amongst all six players is vital to success and should be constantly reinforced. 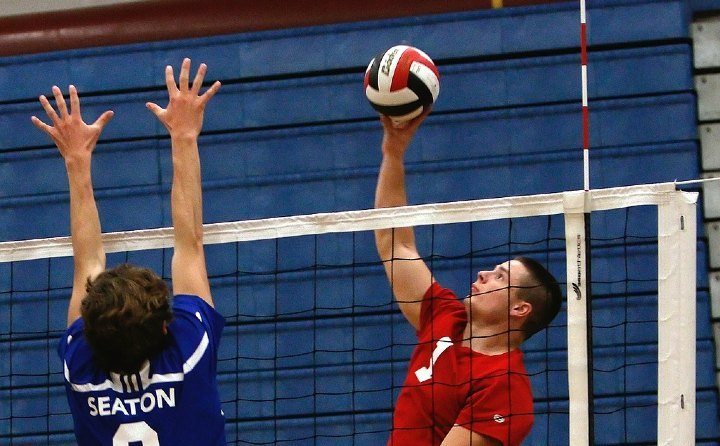 Amateurs often spend a lot of time getting irritated by net violation calls.

A surefire way to avoid these penalties is to stay out of the net!

These penalties often arise from over-aggressive attempts at hitting the ball.

Teaching players to be aware of their surroundings is important to winning games and their safety.

Players that unwittingly travel into the net, under the net, or into teammates can represent a danger and cause injuries.

Players should understand that it is better to take a little of their swing and control their momentum than it is to hit a kill shot and end up in the net.

5. Set and Pass Off the Net

This tip will directly impact the previous one.

Setting or passing the ball too close to the net will undoubtedly result in your novice attackers ending up in the net.

Setters are usually in a position to avoid this error but when a setter is “out” and another player must help, the ball is commonly set very tight to the net.

Beginners should focus on putting sets about a half-meter off the net. This will allow for the inevitable movement of the ball caused by novice setters drifting toward the net with their momentum.

As setters improve, accuracy can be honed.

Passing the ball near the net is disastrous for a new setter.

Beginner setters often have a hard time managing the chaos of getting to their spot, let alone mastering the difficult skill of pulling a tight pass off the net.

Teams with a novice setter should keep their passes liberally off the net to provide the setter plenty of the space to work with. A tight pass can quickly become a kill for your opponent, as well.

Players trying to guide the ball too close to the net often find themselves being credited for a dreaded “overpass.”

This is essentially a set for your opponent to swing at a high-percentage kill.

One of the most thrilling plays a volleyball player can experience is blocking the opponent.

Beginners frequently have a hard time with this for two reasons.

(1) Despite net heights that are adjusted for age, it can be hard for younger players to have the jumping power to get high enough to put their hands over the net. Simply jumping with your arms raised over your head is not enough.

(2) Novices almost always jump with their arms up and hands stretched to the ceiling. Hands stretched upward will result in the ball dribbling down the player’s chest or being deflected up into the air.

(How to block correctly)

Now, two things to work on:

This tip probably should have been number one on this list.

The worst moment for a coach is seeing players chatting, staring off in the distance, or generally disengaged.

Beginners should always be paying attention and engaged in what is happening.

From simple passing warmups to hitting lines, players should have their eyes on the ball and be involved in the drill.

To help with this, it’s important for coaches to have engaging drills prepared that are appropriate for the skill level on the court.

While advanced players can learn from scrimmages, novices might benefit more from focused drills that make basic skills the priority.

Beginners tend to make assumptions about what will happen, rather than being prepared for anything.

Many young players are so busy concentrating on where they should be at any given moment, they tend to forget there is a ball in play. 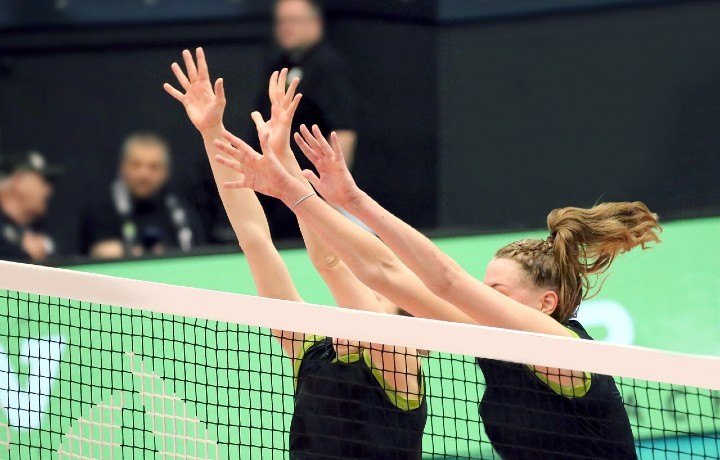 A foot fault may be one of the most mindless penalties a player can incur.

The serve is the one moment where the player is in complete control. The toss, approach, and follow-through are all done by the server - no one else.

A foot violation occurs when a player steps on or over the end line before the ball has been contacted.

As we know, the line is IN during a volleyball match.

The same goes for the server...

If their foot contacts the line then their foot is technically in the court.

This makes them at fault for a foot foul.

For those experimenting with a jump serve, the rule is that you may land in the court after the ball has been contacted.

You must take off to attack the serve from behind the end line and the ball must be contacted before landing inside the court (including on the line).

Beginners should take care to really practice their serving motion and how momentum carries them forward.

One of the most important parts of learning the sport is getting a handle on where all the lines are on the court.

9. Fight the Urge to Catch

But this is a list for beginners and we’re reviewing the basics.

A natural urge for very young or new volleyball players is to catch the ball.

Beginners are often taken aback by the chaos of a volleyball match, especially in a tournament setting. The sounds of the gym or echoing, teammates and onlookers are shouting, and shoes squeak incessantly. This often leads to a player “thinking” they heard the whistle and catching the ball.

Do NOT catch the ball under any circumstances.

Even if you think the play is dead, keep playing.

This old saying has been debunked many times over but the intent is true – a good defense leads to a good offense.

Beginners should focus on developing a comfortable, strong defense stance.

A player ready to defend the backcourt is standing with knees slightly bent, weight forward off the heels, and arms bent ready to pass.

This athletic positioning allows for quick movement and reaction to an attack.

One thing beginners frequently do that is detrimental to their agility is to keep their hands clasped together while moving.

This may seem right, as your arms are ready to pass, but the movement is severely restricted if your hands are together while running.

Players should be mentally focused and ready to move into proper position behind the ball, form a good passing or digging platform, and make a good pass.

Good defensive posture is both mental and physical.

Regardless of where the attack is coming from, always be ready to play defense and pass. 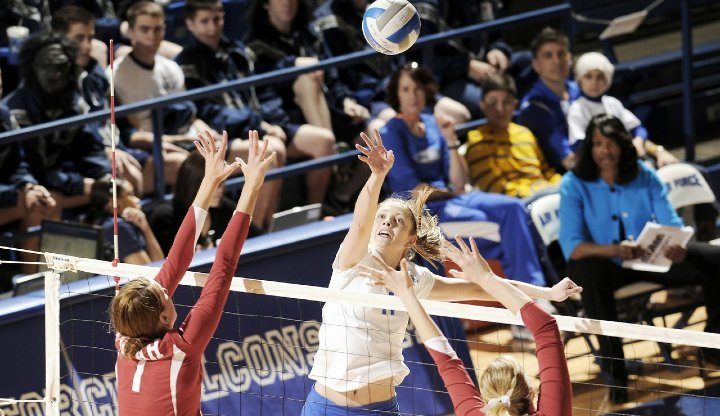 Young players tend to loathe the process of warming up to play volleyball.

While some of the exercises and stretches can be boring, they might just help players perform better while reducing the risk of injury.

A lack of warmup can often spawn from tardiness to practice or a rec match.

Avoid the temptation to skip this crucial step, regardless of your ability to mind a schedule.

A proper warmup should feature movements that slowly allow the muscles and ligaments being repetitively used (knees, hips, and shoulders) to get loose.

Older players should focus on extended warm-up time, as they are more prone to overuse injuries.

However, players of all ages should develop a good warm-up routine.

Since we’re talking about appropriate self-care, do not run off the court and jump in the car to leave.

A cool down is vital just like a warmup.

For those athletes that deal with chronic soreness after workouts or matches, the cool-down is very important.

Stretching the already warm muscles will help avoid the buildup of lactic acid.

A cool-down does not have to be as long as a good warmup but it should include stretches focused on shoulders, thighs, calves, and the ankle.

Beginners might be benefited by developing a physical checklist that they can review while packing their gym bag for practice or a tournament.

This is something I’ve recommended to many players.

It can be easy to forget your knee pads in all the excitement of an impending match.

Lift up your team at all times.

Volleyball is a sport that requires all six players (or however many are on the court) to work in harmony.

This can be difficult if discord is felt throughout the group.

Volleyball is a game that is easy to learn and can be a lot of fun.

Take these 15 volleyball basics to your next time on the court and start improving your ability to play and understand the game!