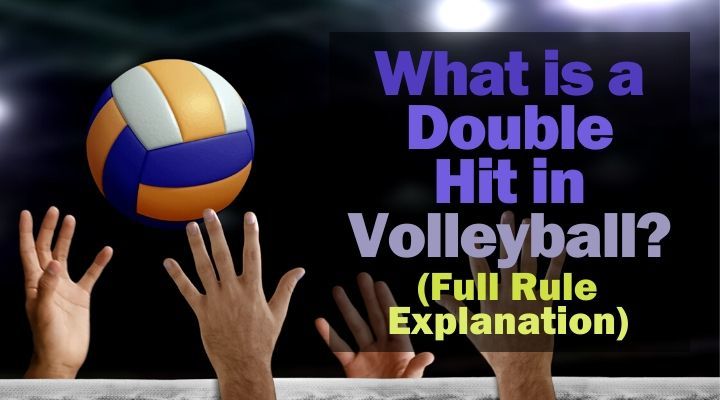 What is a Double Hit in Volleyball? (Full Rule Explanation)

The sport of volleyball, like any other, has a variety of rules ranging from simple to intricate.

In the most basic sense, the goal of the game is to attack the ball to the other side of the net and prevent your opponent from doing the same.

There are plenty of rules that make this goal a little more challenging to attain.

For instance, your side can only contact the ball three times in one attack attempt. Further, there are rules governing who can attack the ball, where an attack can come from, and how players are physically allowed to contact the ball.

According to the FIVB, a double contact is when a player hits the ball twice in succession or the ball contacts various parts of the body in succession.

It is important for players to understand that a double hit in volleyball will be called regardless of intent.

Therefore, if you accidentally make a double contact during play, it will be called if seen by a referee.

The Double Hit in Real Life

The double hit in volleyball is unique as a violation can be committed in one of two ways:

The most basic of double hits is the obvious contacting of the ball twice in a row.

This is frequently seen in young or beginner players who have a moment of forgetfulness or believe there are no teammates capable of getting to the ball.

The back-to-back contact is certainly the easiest to identify.

It can be slightly challenging in the event a player contacts the ball, the ball hits the net, and returns to the same player.

This would still dictate a double hit fault call by the referee.

The game typically speeds up as the skill level increases. This can make the identification of a double hit more challenging for referees and observers alike.

In these cases, a referee will look for other signs of a double contact like unusual ball movement.

The vast majority of double hit calls are related to accidental double contact by the same player while trying to make a pass.

This commonly occurs with balls low to the ground or balls coming from odd angles to the setter.

Another instance where double hits are seen is when a player attempts to dig a ball and the ball pops up into her after digging it up. 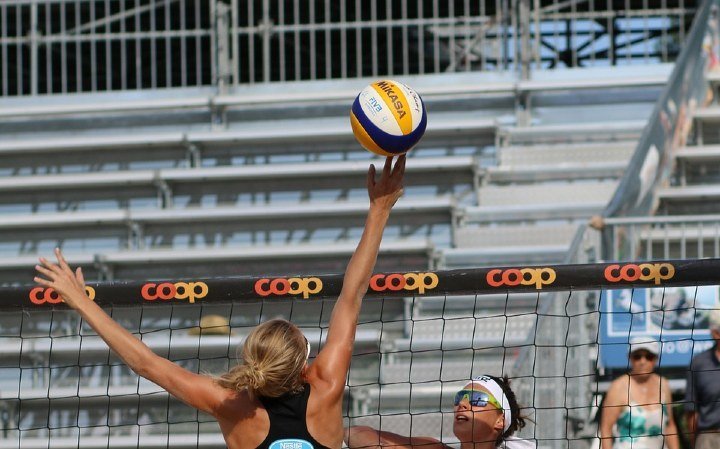 There are scenarios where a double hit appears to have occurred but is not called.

It is important for players to both understand when this might be the case and practice always playing through the whistle.

If a double hit is not called, regardless of whether it happened or not, players should play on.

The most obvious exception to the double hit rule is during a blocking event.

A block or block attempt does not count as a contact. Therefore, if a player touches the ball while blocking and the ball comes back to her, she may play the ball with no penalty.

While the double hit rule does limit back-to-back contacts, it does not state that you may only touch the ball once while it is on your side of the net.

Player A is simply not allowed to touch the ball twice in a row.

There are moments during a volleyball game where two players will contact the ball at virtually the same instant.

This is allowed by the rules.

Two players can hit the ball at the same time. However, both of those players are deemed “out” for the next contact.

If either contacts the ball next, then a double hit fault will have occurred.

Players need to understand that while they may not have contacted the ball along with their teammate, appearances can lead to a double hit call.

If a player was close enough that it looks like she made contact, she should allow another teammate to take the next hit.

The Serve and the Double Hit Rule

The serve plays a major role in many double hit fault calls.

Most double hit calls off the serve are received by players who are adhering to the advice given to them at a young age.

Coaches hammer young players on the importance of only taking the serve with a good platform.

Unfortunately, this advice can quickly doom players as their skill level increases.

A player trying to use her platform to receive a hard serve that is up into her body will inevitably have the ball hit her arms and then her torso, face, or upper body.

This will result in a double hit call.

It is important to teach younger players the skill of overhead passing, especially on hard-hit serves.

Players should not equate a set and an overhead pass. These are different skills.

An overhand pass should be performed with the player in a similar body position to a “normal” pass.

The hands should be firm, and your body should be square with the target. The arms should extend through the ball in a pushing motion, rather than the up and out motion of a set.

If these movements are followed, a referee is unlikely to call a double hit fault. 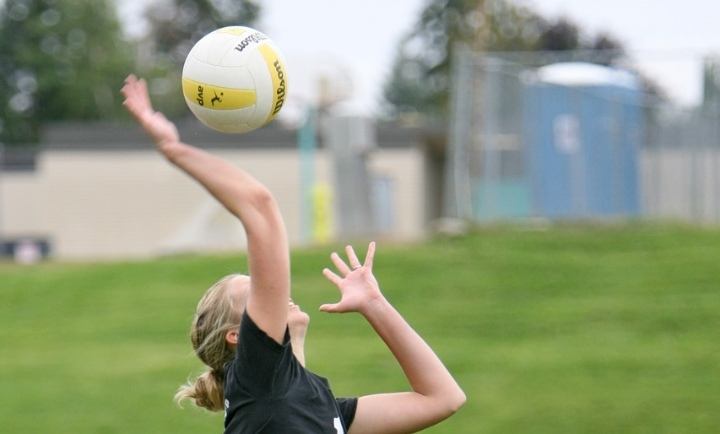 The Setter and the Double Hit Rule

The double hit in volleyball call can be the most frustrating rule for setters.

Even a slight mistiming or misalignment can result in the ball contacting both hands unevenly.

This results in the dreaded spin that tips all referees off on a double hit violation.

A sideways spin, especially a ball that is rapidly spinning, will almost always be ruled as a violation against the setter.

Some referees are more lenient than others, but the setter is often held very accountable to ensure clean sets.

It is vital to work with your setter to develop the skill of clean, smooth sets that lack all signs of sideways rotation.

However, with appropriate instruction, practice, and focus, the violations can be limited to rare occurrences.

What happens when the setter gets a highly spinning ball coming towards them? With a good set, it is almost impossible to not have a ball that spins coming off the set, even when the ball is cleanly set which is why referees should be looking or listening for a double impact rather than purely judging on a spinning ball. Imagine the physics of this. Many of these balls are coming towards the setter at a high spin rate, especially with the use of complicated serve techniques.